Allison Munn is an American actress who has a net worth of $2 million. Allison Munn has earned her net worth mainly from her role as Caroline from That '70s Show. She also played the character Tina Haven in What I Like About You and as Lauren on One Tree Hill, both series aired on The WB Network.

Allison was born on October 7, 1974 in Columbia, South Carolina to Russell and Nadine Munn. Nadine, an elementary school, teacher encouraged Allison to study the arts. Allison graduated from AC Flora High School and The College of Charleston. Her very first role was in the Off-Broadway classic, The Fantasticks. she a small role in the Hollywood production White Oleander with well-known actress Michelle Pfeiffer and in the film Elizabethtown which was directed by Cameron Crowe. Her big break came when she got the role on the sitcom What I Like About You in September 2003. She co-starred alongside Amanda Bynes and Jennie Garth. She starred on the show for three-seasons until it ended on April 24, 2006. Her career took a jump with recurring role of Fez's stalker girlfriend Caroline on That 70's Show. She married her childhood friend actor Scott Holroyd on November 17, 2007. The wedding ceremony took place at the French Huguenot Church in Charleston, South Carolina. They currently live in Los Angles with Buster Keaton their pet terrier, Allison gave birth to a baby boy they named Nathan Powell Holroyd in November 2011. Holroyd played the role of David Fletcher the new love interest of Allison's character Lauren on the WB's final season of One Tree Hill. 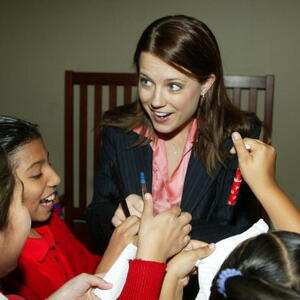