Allison Mack Net Worth and Salary: Allison Mack is an American actress who has a net worth of $2 million dollars. Mack is best known for playing Chloe Sullivan on the WB/CW Superman-inspired series "Smallville" (2001–2011) and Amanda on FX's "Wilfred" (2012; 2014). In 2018, Allison was arrested for her role in recruiting women into the NXIVM sex cult; she has been charged with numerous crimes, including sex trafficking, forced labor conspiracy, and racketeering.

Early Life: Allison Mack was born Allison Christin Mack on July 29, 1982, in Preetz, Schleswig-Holstein, West Germany. Her parents, Mindy and Jonathan, are American, and Allison was born in Germany because Jonathan, an opera singer, was performing there at the time. The family moved to America when Mack was 2 years old, and they settled in Long Beach, California. At age 4, Allison began appearing in commercials and print ads for a German chocolate company, then briefly worked as a model before enrolling at L.A.'s Young Actors Space when she was 7 years old.

In 2001, Mack began co-starring with Tom Welling, Kristin Kreuk, and Michael Rosenbaum on "Smallville." She played Chloe Sullivan, editor of the school newspaper and close friend of Clark Kent, on 204 episodes of the series. The show ran for 10 seasons, and its pilot attracted 8.4 million viewers, which set a record for WB debuts. Allison also played Chloe in the web series "Smallville: Chloe Chronicles" (2003–2004) and "Smallville: Vengeance Chronicles" (2006), and she directed two episodes of "Smallville," "Power" (2009) and "Warrior" (2010). While starring on "Smallville," Mack lent her voice to the animated films "The Ant Bully" (2006) and "Superman/Batman: Public Enemies" (2009), guest-starred on R.L. Stine's "The Nightmare Room" (2002), and appeared in the feature film "You" (2009) and the short films "Alice & Huck" (2008), "Frog" (2010), and "Purgatory" (2010). In 2011, Allison played the title role in the crime drama "Marilyn" and produced the short film "Blink." In 2012, Mack joined the cast of "Wilfred" as a love interest for the main character, who was played by Elijah Woods. She guest-starred on Fox's "The Following" and NBC's "American Odyssey" in 2015, and she voiced Evelyn Gale on Amazon Video's "Lost in Oz" in 2017, but her voice was removed and redubbed after her arrest.

NXIVM Cult: In 2006, Allison joined the Vancouver chapter of NXIVM, a multi-level marketing company, not long after her "Smallville" co-star Kristin Kreuk joined the organization. NXIVM offered "Executive Success Programs" and self-improvement techniques, but a 2003 "Forbes" article stated that detractors felt that founder Keith Raniere was running a "cult-like program aimed at breaking down his subjects psychologically, separating them from their families and inducting them into a bizarre world of messianic pretensions, idiosyncratic language and ritualistic practices." In 2017, actress Sarah Edmondson revealed that Mack recruited her into a secret group within NXIVM called "Dominus Obsequious Sororium" (which translates to "Master Over Slave Women") and that she was branded during an initiation ceremony. Alison admitted in a 2018 "New York Times" interview that introducing branding into the group was her idea. The article described Mack as "Raniere's personal slave" (based on F.B.I. findings), saying that she signed a contract that promised him her home and future children if she "broke her commitment."

On April 20, 2018, the FBI arrested Allison on forced labor conspiracy, sex trafficking, and sex trafficking conspiracy charges. Prosecutors alleged that Mack used blackmail to coerce NXIVM members into sexual relations with Raniere. She was released on a $5 million bond on April 24th and placed under house arrest at her parents' California home. Allison pleaded guilty to racketeering and racketeering conspiracy charges on April 8, 2019, and as of this writing, a trial date has not been set. Mack has also been named in a lawsuit filed by former NXIVM members, which alleges that Allison is one of 15 people who "exerted power over the plaintiffs; took their money; made it financially, physically and psychologically difficult, and in some cases impossible, to leave the coercive community; and systematically abused plaintiffs physically and emotionally." In October 2020, Raniere received a sentence of 120 years in prison on several charges, including sex trafficking and possession of child pornography.

Personal Life: In 2003, Alison announced that she was engaged to her boyfriend, a musician named Peter, but the two never married. After the relationship ended, she reportedly dated actors Chad Krowchuk and Sam Witwer, then wed Canadian "Battlestar Galactica" actress Nicki Clyne in February 2017. During Allison's arraignment, prosecutors alleged that the marriage was a sham orchestrated to circumvent United States immigration laws. In September 2020, she began taking classes at University of California, Berkeley, but a student in her "Gender, Sex and Power" course reported that Alison left the class "after outcry from students who did not feel safe discussing those topics with someone who branded other women."

Awards and Nominations: Mack has been nominated for seven Teen Choice Awards, winning Best Sidekick in a TV Series for "Smallville" in 2006 and 2007. The Academy of Science Fiction, Fantasy & Horror Films nominated Allison for a Saturn Award for Best Supporting Actress on Television in 2006 and 2007, and she won a SyFy Genre Award for Best Supporting Actress in 2008. 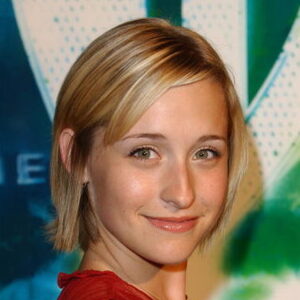