How much is Alison Pill Worth?

Alison Pill Net Worth: Alison Pill is a Canadian actress who has a net worth of $2 million dollars. Alison Pill was born November 27, 1985 in Toronto, Ontario, Canada. Pill began her career at age twelve in numerous films and television series. She transitioned into adult roles and her breakthrough came in the television series The Book of Daniel (2006). She is best known for her roles in the films Milk (2008), Scott Pilgrim vs. the World (2010), Midnight in Paris (2011) and the television series In Treatment (2009), The Pillars of the Earth (2010) and The Newsroom. She was also nominated for a Tony Award for her performance in Martin McDonagh's The Lieutenant of Inishmore. She was nominated for a Young Artist Award for her lead role as a ballerina in Degas and the Dancer (HBO, 1998) and also played key roles such as Annabeth Gish's daughter in the drama God's New Plan (CBS, 1999) and opposite Naomi Judd in A Holiday Romance (CBS, 1999). Pill was again nominated for a Young Artist Award for the family 'clone' fantasy The Other Me (Disney, 2000); she played Farrah Fawcett's willful daughter in the family drama Baby (TNT, 2000) and played a young Lorna Luft in the critically acclaimed biopic Life with Judy Garland: Me and My Shadows (ABC, 2001). At the mere age of three, Pill's parents enrolled her in private dance and voice lessons, which led her to study at both the National Ballet School and the Toronto Children's Chorus. At age 10 she was approached by a CBC Radio producer to narrate books on tape. Pill booked her first job in The New Ghostwriter Mysteries (CTW, 1997) and quickly won a casting in the Mario Puzo crime/drama miniseries. Alison Pill was engaged to actor Jay Baruchel from 2010 to 2013. Baruchel made their engagement public when he thanked his fiancée (Pill) during an acceptance speech at the Genie Awards in Ottawa, Canada; Baruchel later alluded to their breakup in a Twitter posting in February 2013. 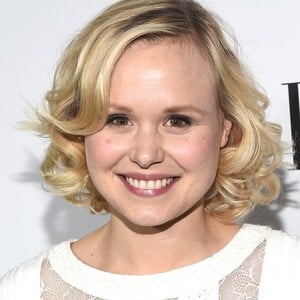