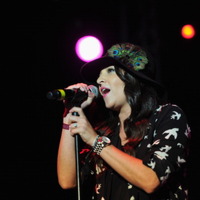 Alisan Porter net worth: Alisan Porter is a retired American actress, and singer/producer who has a net worth of $500 thousand. Alisan Porter was born in Worcester, Massachusetts, and began singing and acting when she was three. She went on to become the youngest winner of "Star Search" ever, winning the Junior Singing competition at age 5. From there, she moved to film and television appearing in such projects as "Pee-wee's Playhouse", "I'll Take Manhattan", "Family Ties", ""Homesick", "Parenthood", "Chicken Soup", "Stella", "I Love You to Death", "Perfect Strangers", "When You Remember Me", and "The Golden Girls". She is most widely recognized for her co-starring role in the film, "Curly Sue". She took some time away from acting to focus on school in the 90s. After she graduated, she relocated to New York, and almost immediately booked a role in the Broadway production of "Footloose". She has since gone back and forth between theater projects and performing with various bands. She is currently based in Los Angeles and is focusing on a music career.