Alicia Vikander Net Worth: Alicia Vikander is a Swedish actress who has a net worth of $8 million. Alicia Amanda Vikander was born in Gothenburg, Sweden in October 1988. Her mother was an actress and her father was a psychiatrist. Alicia has five siblings. She studied at the Royal Swedish Ballet School for nine years.

She also appeared in musicals at the Gothenburg Opera. Her first role came in the 2002 TV movie Min balsamerade mor. In 2005 Alicia starred in the TV series En decemberdrom. From 2007 to 2008 she starred in the series Andra Aveyn (Second Avenue). Vikander has starred in the movies Pure in 2010 and The Crown Jewels in 2011. Her role as Katarian in Pure won her the Guldbagge Award for Best Actress and the Rising Star Award at the Stockholm Film Festival in 2010. She performed in the English movie Anna Karenina in 2012. She has also starred in the movies A Royal Affair, The Fifth Estate, and Hotell. In 2013 she was nominated for a BAFTA EE Rising Star Award. In 2014 Vikander appeared in the film Seventh Son. Other notable roles include 2014's Ex Machina, 2015's The Danish Girl, 2016's Jason Bourne and 2017's Submergence. 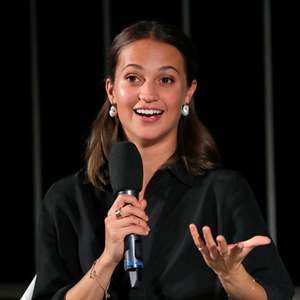