Ali Stroker net worth: Ali Stroker is an American actress and singer who has a net worth of $1 million. Ali Stroker was born in Ridgewood, New Jersey in June 1987. Her father was the high school basketball coach and one of his players was future Today Show co-host Willie Geist.

Ali became the first actress to use a wheelchair for mobility to appear on Broadway and also the first to be nominated for and to win a Tony Award. She has had recurring roles on the TV series Faking It as Wendy from 2014 to 2015, Ten Days in the Valley as Tamara in 2017, and City Boyz as Margot in 2018. Stroker has also appeared in episodes of the TV series Glee, Lethal Weapon, Drunk History, Instinct, and Charmed and appeared in the film Cotton in 2014. In 2012 she starred in the reality TV series The Glee Project. She has starred in Broadway productions of Spring Awakening and Oklahoma!. Ali Stroker won a  Tony Award for Best Featured Actress in a Musical and a Drama Desk Award for Outstanding Featured Actress in a Musical for Oklahoma! in 2019. 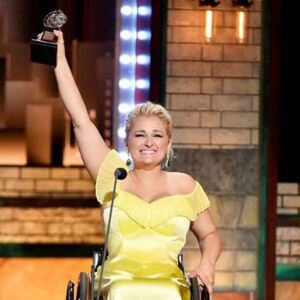