Alfred Molina net worth: Alfred Molina is British actor who has a net worth of $8 million. He is best known for his roles in Raiders of the Lost Ark, Prick Up Your Ears, The Man Who Knew Too Little, Spider-Man 2, Maverick, Species, Not Without My Daughter, Chocolat, Frida, Steamboy, The Hoax, Prince of Persia: The Sands of Time, The Da Vinci Code, The Little Traitor, An Education, The Sorcerer's Apprentice, and Rango.

More recently, he played "Richard Morales" a detective on the NBC drama, Law and Order: LA. Molina was born in Paddington, London and grew up in a working class district in Notting Hill that was inhabited by many immigrant families. His mother was an immigrant from Italy, and his father was a Spanish immigrant. He decided to become an actor after seeing Spartacus at the age of nine, and attended the Guildhall School of Music and Drama. He has been working as an actor for over four decades and has appeared in over eighty television and film productions throughout his career. Molina resides in Los Angeles, California, and announced in 2004 that he had become a U.S. citizen. He is fluent in both Italian and Spanish, in addition to his native English. He married actress Jill Gascoine in 1986 in Tower Hamlets, London. He has a daughter, Rachel, from a previous relationship, and two stepsons (Adam and Sean), from Gascoine's first marriage. In addition to acting, Molina is an extremely dedicated AIDS advocate. Not only does he donate towards AIDS research, but also participates in the Los Angeles AIDS Walk and recently played a role in Joseph Kibler's (a 21 year-old AIDS survivor's) documentary Walk On. 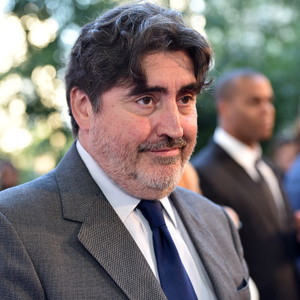