What Is Alexis Bledel's Net Worth and Salary?

Alexis Bledel is an American actress, model, and producer who has a net worth of $6 million. That is a combined net worth with her husband, fellow actor Vincent Kartheiser. Bledel is best known for playing Rory Gilmore on The WB/CW series "Gilmore Girls" (2000–2007) and Netflix's "Gilmore Girls: A Year in the Life" (2016).

She also produced and starred in the 2006 short film "Life Is Short," and she has appeared onstage in "Love, Loss, and What I Wore" (2011), "Regrets" (2012), and "College Republicans" (2016). Alexis has graced the covers of magazines such as "Glamour," "Seventeen," and "Teen Vogue," and she appeared in print ads for Naturistics and Bonne Bell.

Alexis Bledel was born Kimberly Alexis Bledel on September 16, 1981, in Houston, Texas. Her mother, Nanette (a flight attendant) grew up in Mexico, and her father, Martin, is from Argentina. Alexis and her younger brother, Eric, were raised in a Spanish-speaking household, and Bledel didn't learn English until she started going to school. Alexis attended St. Agnes Academy, a Houston Catholic school, and she also studied at Lutheran and Baptist schools. When Bledel was a child, her mother got her involved in theatre to help her overcome her shyness, and Alexis was cast in plays such as "The Wizard of Oz" and "Our Town." As a teenager, she began working as a model after being discovered by a scout at a local mall. In 1999, Bledel enrolled at New York University's Tisch School for the Arts to study film, but she left after a year.

In 1998, Bledel had an uncredited role in the Wes Anderson comedy "Rushmore," and she got her big break when she was cast as Rory Gilmore on "Gilmore Girls" alongside Lauren Graham. The series premiered on October 5, 2000, and aired 153 episodes over seven seasons. In 2016, Netflix revived the show for the four-episode miniseries "Gilmore Girls: A Year in the Life." In 2002, Alexis starred as Winifred Foster Jackson in the film "Tuck Everlasting," which is based on a 1975 book by Natalie Babbitt. In 2004, Bledel portrayed Goldilocks in the short film "DysEnchanted" and Georgina "Georgie" Darcy in "Bride and Prejudice." The following year, she appeared in "Sin City," which grossed $160 million at the box office, and co-starred with Amber Tamblyn, America Ferrera, and Blake Lively in "The Sisterhood of the Traveling Pants." Alexis reprised the role of Lena Kaligaris in 2008's "The Sisterhood of the Traveling Pants 2," and during a 2018 appearance on "The Tonight Show Starring Jimmy Fallon," she revealed, "We just pitched a third movie and I hope it comes together. It would be so great." 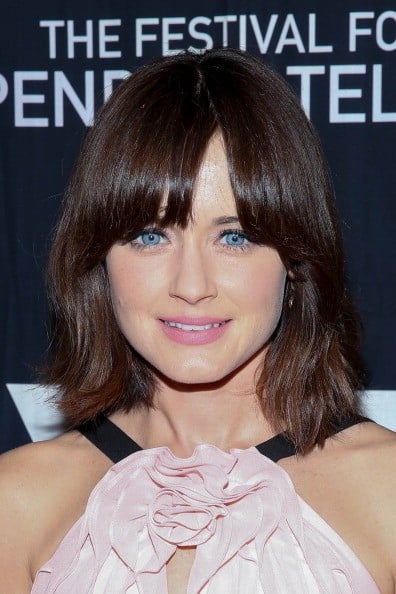 Bledel starred in the 2006 romantic comedy "I'm Reed Fish," and in 2009, she guest-starred on "ER," appeared in the films "The Good Guy" and "Post Grad," and signed with talent management company IMG's modeling division. She starred in the 2010 films "The Conspirator," "The Kate Logan Affair," and "Girl Walks into a Bar," and in 2011, she played Violet to Saoirse Ronan's Daisy in "Violet & Daisy." In 2012, Alexis appeared in the film "The Brass Teapot" and had a three-episode stint on "Mad Men." Her character, Beth Dawes, had a brief affair with Pete Campbell, who was played by Bledel's future husband, Vincent Kartheiser. Alexis appeared in the TV movie "Remember Sunday" in 2013, followed by the films "Parts per Billion" and "Outliving Emily" in 2014. Around that time, she also filmed the sitcom "Us & Them," which only lasted seven episodes despite an impressive cast that included Michael Ian Black, Kerri Kenney-Silver, Kurt Fuller, Jane Kaczmarek, and Jason Ritter. The series was meant to be a mid-season replacement on Fox during the 2013–14 season, but the network decided not to air it, and it premiered on Crackle in 2018. Bledel co-starred with Katherine Heigl in 2015's "Jenny's Wedding" and with Kurt Russell in 2019's "Crypto," and since 2017, she has played Emily Malek on the Hulu series "The Handmaid's Tale." She had a recurring role during the show's first season, and she was promoted to a series regular for season two.

She began a relationship with her "Mad Men" co-star Vincent Kartheiser in 2012, and they became engaged in early 2013. Bledel and Kartheiser married on June 7, 2014, and they welcomed a son in the fall of 2015. Alexis is close friends with her "The Sisterhood of the Traveling Pants" co-stars, and Bledel, Amber Tamblyn, and America Ferrera are godmothers of Blake Lively's eldest daughter, James, who was born in 2014.

Bledel has received four Primetime Emmy nominations for "The Handmaid's Tale," winning Outstanding Guest Actress in a Drama Series in 2017. The series has also earned her awards from the Gold Derby Awards, International Online Cinema Awards, and Online Film & Television Association, and the cast has received two Screen Actors Guild Award nominations for Outstanding Performance by an Ensemble in a Drama Series. Alexis has been nominated for 10 Teen Choice Awards, taking home the prize for Choice "It" Girl in 2005 and Choice TV Actress: Comedy for "Gilmore Girls" in 2005 and 2006. She also won a Young Artist Award for Best Performance in a TV Drama Series – Leading Young Actress for the series (2001) as well as a Family Television Award for Best Actress (2002). Bledel earned a Bravo Otto award for Best Female TV Star in 2004, and she won a Gold Derby Award for Drama Guest Actress for "Mad Men" in 2012. Alexis has also received nominations from the Academy of Science Fiction, Fantasy & Horror Films ("Tuck Everlasting"), ALMA Awards ("Gilmore Girls"), Hollywood Critics Association ("The Handmaid's Tale"), IGN Summer Movie Awards ("The Handmaid's Tale"), and Satellite Awards ("Gilmore Girls") as well as a Broadcast Film Critics Association Award nomination for Best Acting Ensemble for "Sin City."

In 2016, Bledel and Kartheiser sold their one-bedroom, two-bathroom Brooklyn Heights co-op for $1.32 million after lowering the asking price from $1.56 million. The home was purchased in 2011 for $760,000, and it includes 18-foot ceilings, a chef's kitchen, and a private deck. 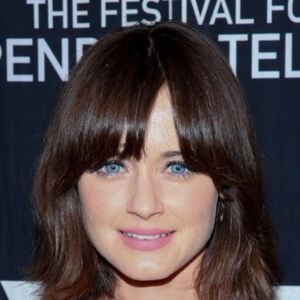