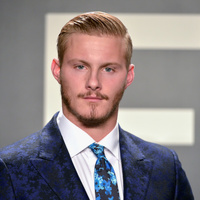 Alexander Ludwig Net Worth: Alexander Ludwig is a Canadian actor, singer, and model who has a net worth of $3 million. Alexander Ludwig was born in Vancouver, British Columbia, Canada in May 1992. He studied theater at the University of Southern California. At nine years old Ludwig started his acting career in a commercial for a Harry Potter toy. He first appeared in the video Air Bud 3 in 2001. In 2014 he starred as Bjorn Lothbrok in the television series Vikings. Ludwig has also starred in the movies MXP: Most Xtreme Primate, Eve and the Fire Horse, Scary Godmother: The Revenge of Jimmy, A Little Thing Called Murder, The Sandlot Kids 3, The Seeker: The Dark is Rising, Race to Witch Mountain, The Hunger Games, Grown Ups 2, Lone Survivor, and When the Game Stands Tall. In 2012 Ludwig won an MTV Movie Award for Best Fight and a Teen Choice Award for Choice Movie Villain for his role as Cato in The Hunger Games. He was also nominated for a Razzie Award for Worst Screen Combo for Grown Ups 2 in 2014. Alexander released his debut single "Liv It Up (Teenage Wasteland)" in 2012.