Alex O'Loughlin net worth and salary: Alex O'Loughlin is an Australian actor who has a net worth of $25 million. He has achieved the kind of fame in the field of acting that many aspiring artists can only dream about. He has appeared in a number of popular of film and television shows but Alex is probably best-known for starring on the CBS series "Hawaii Five-0". Alex appeared in all 240 of the series' episodes over 10 seasons between 2010 and 2020.

Early Life: Alex O'Loughlin was born on August 24, 1976 — in Canberra, Australia. O'Loughlin comes from an Irish and Scottish background; his mother is a nurse and his father a physics and astronomy teacher in Sydney.

O'Loughlin dealt with a significant amount of adversity as a child, suffering from obsessive-compulsive disorder at an early age. Despite this obstacle, Alex enrolled at the National Institute of Dramatic Art (NIDA) in Sydney back in 1999, graduating in June of 2002 after having successfully earned a three-year, full-time Bachelor of Dramatic Art degree.

O'Loughlin would begin working in short films and fringe theatre at a young age — as a teen operating out of Sydney. Among O'Loughlin's first acting gigs included an assignment as an extra in a commercial in which he played a Marine, which would be an early precursor for future masculine roles that would help catapult his career to the next level.

Film and TV Career: After graduating from NIDA and working on commercial spots, O'Loughlin worked in Australian television and film productions. His credits include standout roles in BlackJack: Sweet Science, White Collar Blue, as well as Love Bytes.

In 2004 O'Loughlin earned an early film role as the lead in Oyster Farmer and he later appeared in films such as Man-Thing, Feed, as well as an Australian mini-series called The Incredible Journey of Mary Bryant — a role which garnered him a nomination for Best Lead Actor in Television from the Australian Film Institute Awards (2005), not to mention a nomination for Most Outstanding Actor in a Drama Series at the Logie Awards (2006).

Alex next would earn a high-profile role on the critically acclaimed TV show The Shield, which helped propel FX into a formidable force in content creation and is still heralded as one of the best television police dramas ever made. Alex played Detective Kevin Hiatt, a character that was introduced as a new member of the fictionally depicted strike team. O'Loughlin also turned in performances in films like The Back-Up Plan, holding his own while playing alongside Jennifer Lopez.

O'Loughlin's star power continued to increase, so much so that he was in serious contention when it came to playing the legendary character James Bond. Alex participated in an elaborate screen test for the role at the behest of director Martin Campbell. Although O'Loughlin didn't get the part, he was fitted for the trademark 007 tuxedo for his screen test.

After The Shield, O'Loughlin earned a role as the series lead on the CBS series Moonlight. In this show he played a private investigator/vampire named Mick St. John. Due to circumstances out of anyone's control, the production of the show was interrupted by a burgeoning Hollywood writers' strike. Speculation began to arise that Moonlight would be dropped; however, fan pressure helped the show get four additional episodes. After the show was cancelled, there was a significant fan-based campaign to get a second-season renewal — but to no avail.

O'Loughlin was later cast as the lead in the CBS hospital drama Three Rivers, which was developed in part by producer Carol Barbee. The show aired during the Sunday 9:00 pm timeslot (2009-2010).

In 2013 O'Loughlin won the Breakthrough Award for Los Angeles–based non-profit Australians in Film at their ceremony held on October 24, 2013.

Hawaii Five-0: Alex is best-known for starring in the CBS remake of the iconic show Hawaii Five-0, portraying Lieutenant Commander Steve McGarrett. The show premiered on September 20, 2010. It ended up winning "Favorite New TV Drama" during the 2010–11 People's Choice Awards. The series ended up airing 240 episodes over 10 seasons through its finale in April 2020.

At his peak, Alex earned $200,000 per episode of the show. That worked out to around $5 million per season.

Philanthropic Efforts: In addition to extensive work in both film and television, O'Loughlin has also completed a great deal of work in the field of philanthropy. O'Loughlin has worked as an ambassador for the Donate Life for America organization, among other charitable efforts.

Personal Life: O'Loughlin was wed to model/surfer Malia Jones on April 18, 2014. They have three children — one child together and one each from previous relationships. 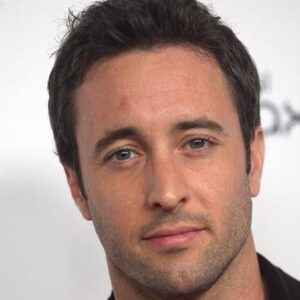