Alex Martin net worth: Alex Martin is an American actress and producer who has a net worth of $4 million. Alex Martin was born in May 1973. She is the daughter of Whoopi Goldberg. Alex Martin appeared in the movie The Color Purple in 1985 and in the film Sister Act 2: Back in the Habit in 1993. She appeared in the movies American Intellectuals in 2001 and Strange as Angels in 2003. Martin appeared in the video Quest of the Delta Knights in 1993 and in the TV movie Call me Claus in 2001. From 2015 to 2016 she served as a guest co-hostess on the TV series The View. Alex Martin produced the short Descendants in 2008 and associated produced the short Sensitive Men in 2018. In 1994 she was named Miss Golden Globe at the Golden Globe Awards. She also starred in and executive produced According to Alex in 2015. 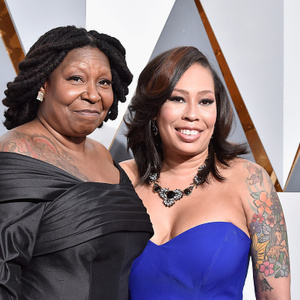