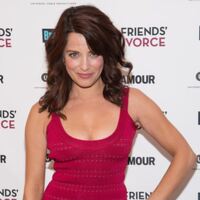 Alanna Ubach net worth: Alanna Ubach is an American actress, model, voice artist, and singer who has a net worth of $800 thousand. Alanna Ubach was born in Downey, California in October 1975. She has more than 130 acting credits to her name and starred as Josie on the television series Beakman's World from 1992 to 1993. From 2012 to 2015 she starred as Amy Hobbs on the TV series See Dad Run. Alanna Ubach has provided voice work for several TV series including Teamo Supremo, Ozzy & Drix, Brandy & Mr. Whiskers, El Tigre: The Adventures of Manny Rivera, The Spectacular Spider-Man, Pound Puppies, Kaijudo, and more. She has also starred in or voiced roles in the movies Sister Act 2: Back in the Habit, Renaissance Man, The Brady Bunch Movie, Legally Blonde, Meet the Fockers, Bad Teacher, Rango, Coco, and more. Ubach won four Behind the Voice Actors Awards for playing Imelda in the movie Coco.