Alan Ritchson Net Worth: Alan Ritchson was born in Grand Forks, North Dakota to Vickie and David Ritchson and has a net worth of $3 million. He is the second born of three sons. He graduated from Niceville High School in 2001. He started out his career as a model for Abercrombie and Fitch.

At the same time, he also became an underwear model for an online website. By 2009, Alan made his last appearance modelling for Abercrombie and Fitch. His most notable first debut was as an army officer on the Hallmark film Though None Go With Me. His most famously known for his recurring role as Aquaman, or Arthur Curry, on the hit series Smallville. In the same year of 2009, he made an appearance as a male stripper on the third season of Head Case. He also played Lucian Manet in Nora Robert's Midnight Bayou. Alan reprised his role as Aquaman for a cameo in Justice League; The New Frontier, as well as the final season of Smallville. Alan has also had the chance to play dead, when he made a guest appearance on CSI: Miami in season 8 of the show. Additionally, he also made a guest appearance on season three of 90210 playing the love interest of one of the main characters. He's also known for his role as Thad Castle in Blue Mountain State. The show was cancelled after its 3rd season. His movie credits include The Butcher, Fired Up! And Beowulf. His most recent works include playing Gloss in the Hunger Games: Catching Fire, as well as a role in the Teenage Mutant Ninja Turtle film. 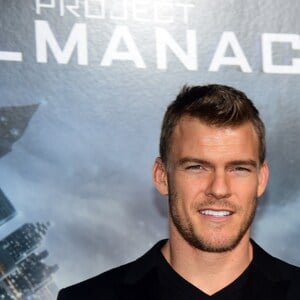