Alan Hamel net worth: Alan Hamel is a Canadian entertainer and television host who has a net worth of $100 million dollars. That is a combined net worth with his wife of more than 40 years, actress/entrepreneur Suzanne Somers.

Alan Hamel was born in Toronto, Ontario, Canada, and attended Ryerson University where he majored in Radio and Television Arts. He began his professional career appearing on the television series, "Midnight Zone'. He then went on to become a household name as the host of the children's series, "Razzle Dazzle". He remained with the show from 1961 to 1964. He also played guest starring or co-starring roles in such projects as "Nightcap", "Lou Grant", "The Last Hurrah", "All in the Family", and "She's the Sheriff". He is most widely recognized for hosting the game shows, "Anniversary Game" and "Wedding Party" on ABC in the late 60s, and for serving as the host of his own programs, "The Alan Hamel Show" and "Alan Hamel's Comedy Bag". He is the husband of actress Suzanne Somers.

Real Estate: Suzanne and Alan own several homes in Southern California. At one point in 2008 they listed a large mansion that sits on 73 acres in Palm Springs for $35 million. They have owned this property since the late 1970s They lowered the price in 2018 to $14.5 million and then 2019 to $9.5 million. They previously owned 480 acres of in northern Palm Springs which in 2018 they donated to the Coachella Valley Conservation Commission.

In 1999 they spent $2.3 million for an oceanfront property in Malibu. In 2001 they bought the lot next door for $2.35 million, which gave them 190 feet of ocean frontage. One of the homes was completely destroyed in a 2007 fire, the other was severely damaged. They listed the combined two-lot property in 2018 for $16.2 million and as of this writing have not found a buyer. 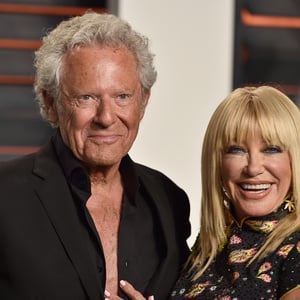