Alain Delon net worth: Alain Delon is a French actor and businessman who has a net worth of $200 million. Alain Delon was born in Sceaux, France in November 1935. He was known as a sex symbol in Europe in the 1960s. Delon has more than 100 acting credits to his name and has mostly starred in films.

He debuted in Send a Woman When the Devil Fails in 1957 and has also appeared in several other movies including Be Beautiful But Shut Up, Christine, Women are Weak, Rocco and His Brothers, The Joy of Living, The Leopard, Once a Thief, Red Sun, Dirty Money, Indian Summer, No Way Out, Zorro, Let Sleeping Cops Lie, The Return of Casanova, A Hundred and One Nights, Day and Night, and many more. Alain Delon was nominated for a Golden Globe Award in 1964 for Most Promising Newcomer and has won several awards including a Cesar Award in 1985. Alain has been married one time. He married Nathalie Barthelemy in August, 1964. He was also in long-term relationships with Romy Schneider and Mireille Darc. He has four children including Anthony and Anouchka. 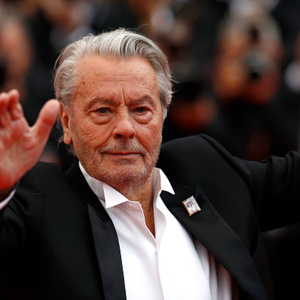