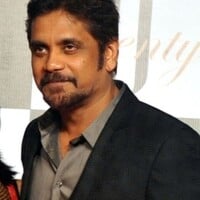 Akkineni Nagarjuna Net Worth: Akkineni Nagarjuna is an Indian actor and producer who has a net worth of $50 million. Akkineni Nagarjuna was born in Chennai, Tamil Nadu, India in August 1959. He primarily works in Telugu Cinema and has acted in more than 90 roles. Nagarjuna has won two National Film Awards, two Filmfare Awards South, and nine state Nandi Awards. Nagarjuna has starred as Annamacharya in the 1997 film Annamayya, Yavakri in the 2002 film Angi Varsha, Major Padmapani Acharya in the 2003 film LOC Kargil, Kancherla Gopanna in the 2006 film Sri Ramadasu, Sai Baba of Shirdi in the 2012 film Shirdi Sai, and Chandaludu in the 2013 film Jagadguru Adi Sankara. Nagarjuna starred in the film Geetanjali in 1989 and Siva the same year. He made his Bollywood debut in 1990 in Shiva. Nagarjuna represented Cinema of South India at the 2013 Delhi Film Festival's 100 Years of Indian Cinema. He co-owns the Mumbai Masters of the Indian Badminton League and Mahi Racing Team India. Akkineni started producing films in 1995. He co-owns the production company Annapurna Studios with his brother Venkat. Nagarjuna is also the president of non-profit film school Annapurna International School of Film and Media. He is also the co-founder of Blue Cross of Hyderabad. Nagarjuna was listed in Forbes India top 100 Celebrities for 2012 and 2013.