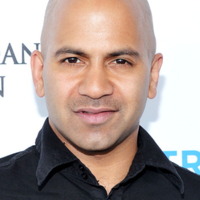 Ajay Naidu net worth: Ajay Naidu is an American actor who has a net worth of $1 million. Ajay Naidu was born in Evanston, Illinois in February 1972. From 1998 to 1999 he starred as Raji Bakshi on the television series LateLine. Naidu has starred in many films including Touch and Go, Where the River Runs Blac, Vice Versa, SubUrbia, Once We Were Strangers, Pi, Montana, My Giant, Scotch and Milk, Shopkeeping, Office Space, Chutney Popcorn, Requiem for a Dream, More Dogs Than Bones, Dinner Rush, You Are Here*, American Chai, Hannibal, K-PAX, The Guru, Bomb the System, Justice, Scary Movie 3, Bad Santa, Perception, 212, Waterborne, Alchemy, The Honeymooners, The War Within, Confess, Hiding Divya, The Accidental Husband, The Wrestler, Righteous Kill, Hotel for Dogs, The Hungry Ghosts, Falling Up, Today's Special, Ashes, 3 Days of Normal, Gods Behaving Badly, Lost Cat Corona, Crazy Famous, and more. In 2001 he won a Queens World Festival Award for Ashes. Ajay Naidu has been married to actress Heather Burns since 2012.