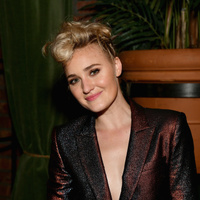 Amanda Michalka Net Worth: Amanda Michalka is an American actress, singer-songwriter, and musician who has a net worth of $700 thousand. Amanda Michalka was born in Torrance, California in April 1991. Amanda is often credited as AJ Michalka. Her sister is Aly Michalka. Amanda stared playing the piano at four years old and the guitar in her teens. She started acting at five in church plays. Her first roles came in the TV series Passions and Birds of Prey in 2002. From 2002 to 2004 she starred as Shannon Gressler in the TV series The Guardian. In 2004 Amanda had a recurring role as Ashley B. on the soap opera General Hospital. From 2003 to 2004 she starred as Bonnie in the series Oliver Beene. In 2011 she had a recurring role on the series Hellcats as Deirdre Perkins and in 2014 on The Goldbergs as Lainey Lewis. She has appeared in the films The Lovely Bones, Slow Moe, Secretariat, Super 8, Grace Unplugged, and Angels in Stardust. Amanda and her sister Aly make up the musical duo 78violet which was formerly known as Aly & AJ. They released their debut studio album Into the Rush in 2005. In 2006 the duo released a holiday album. Their third album Insomniatic was released in 2007 and featured the hit single "Potential Breakup Song". In 2014 Amanda won a MovieGuide Award for Most Inspiring Performance in Movies for Grace Unplugged for which she also issued the single "All I've Ever Needed".