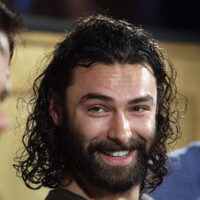 Aiden Turner net worth and salary: Aiden Turner is an Irish actor who has a net worth of $4.5 million. Turner was born in Dublin, Ireland in June 1983. Aiden Turner is best known for playing Kili in The Hobbit movies and John Mitchell on the TV series Being Human. Turner graduated from The Gaiety School of Acting in 2004. He acted in plays such as Romeo and Juliet. His first on screen appearance was in 2007 on the TV series The Tudors. He played Dante on Desperate Romantics in 2009 and starred in The Clinic from 2008 to 2009. From 2009 to 2011 Aidan starred as Mitchell on the TV series Being Human. He played the role of Kili in The Hobbit: An Unexpected Journey in 2012 and The Hobbit: The Desolation of Smaug in 2013. He will reprise the role in the upcoming film The Hobbit: The Battle of the Five Armies. Turner also played Luke in The Mortal Instruments: City of Bones. In 2014 he won an Empire Award for Best Male Newcomer for his work in The Desolation of Smaug. He will play Ross Poldark in the BBC series Poldark in 2015.