Affion Crockett net worth: Affion Crockett is an American actor, writer, dancer, comedian, rapper and music producer who has a net worth of $6 million. He began his career as a dancer at the age of 10, while he was being raised as an army brat in Fayetteville, North Carolina. He attended Fayetteville State University and graduated with a degree in business.

He is known for his ability to do impressions and first honed his impression skills by imitating those close to him. His repertoire includes his mother's West Indian dialect, his schoolteacher's southern drawl, and he can also impersonate several rappers, including Jay-Z. In 1996, he appeared in HBOs' Def Comedy Jam where he demonstrated his impressions and physical comedy and has also appeared on several television shows over the years, including CSI:NY, NYPD Blue, The District, Short Circuitz, Wild 'n Out, Curb Your Enthusiasm, Dance Flick, Welcome Home Roscoe Jenkis, Soul Men and Bernie Mac. Crockett has also appeared in the films Never Back Down, This Means War, and A Haunted House. He is probably best known for his online comedy sketch/parody videos that have garnered over 40 million views on YouTube. These YouTube videos caught the attention of Russell Simmons and the two launched an original comedy series called, Hustles With Russell's that sparked a viral commercial campaign starring Dr. Dre, Lebron James and Crockett himself. Crockett also recently starred in and produced his own sketch comedy show called In the Flow with Affion Crockett for FOX, which was produced by Jamie Foxx; unfortunately the show was cancelled due to low ratings. 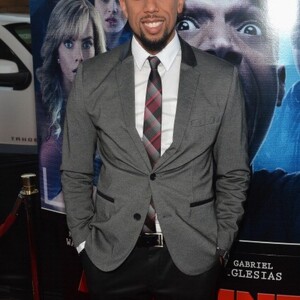