Adamari López Net Worth: Adamari López is an American novelist who has a net worth of $5 million. Adamari López Torres (aka Adamari López) was born May 18, 1971 in Humacao, Puerto Rico. She is best known for her roles in several Puerto Rican and Mexican soap operas. She is currently a host on the Telemundo morning show Un Nuevo Día. Her career began at the tender age of six in the Telemundo Canal 2 production of the Cristina Bazán soap opera, alongside legendary Puerto Rican actress Johanna Rosaly and Venezuelan singer José Luis Rodríguez, El Puma. WAPA-TV chose her to play Iris Chacón and Daniel Guerrero's daughter in Yo sé que mentía' at just nine years old she had landed one of the most important roles in the storyline. López became a household name. She then turned her attention to her education and now holds a B.A. in Communications from the University of the Sacred Heart. In the 2000s, López participated in the soap opera Mujer de Madera. During the recording of that soap opera, her father suffered a heart attack and had to be hospitalized. López returned to Mexico after her father was released from the hospital, but she flew back to Puerto Rico during her filming schedule. In 2011, she participated in the second season of Univision's dancing show Mira Quien Baila, where she won the competition. On March 22, 2005, Adamari López held a press conference in San Juan, announcing she had been diagnosed with breast cancer. Her then-boyfriend, singing sensation Luis Fonsi, announced at the same press conference that he was canceling his 2005 international tour to be by her side. She was expected to recover, as her cancer was caught at Stage 1, a very early stage, and it had not spread to other areas of her body. She underwent surgery and in 2006 it was reported that she was in remission. Since being diagnosed, she has campaigned for breast cancer awareness. Luiz Fonsi and Adamari López later married, but were subsequently divorced in 2010. In January 2013 López published a tell-all book, Viviendo. On September 20, 2014, she announced that she was expecting her first child with fiancé, Toni Costa. 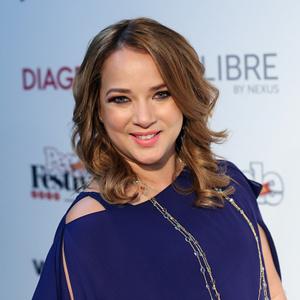