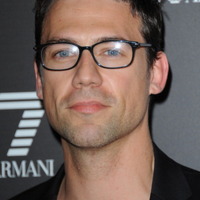 Adam Rayner net worth: Adam Rayner is an English actor who has a net worth of $3 million. Adam Rayner was born in Shrewsbury, England in August 1977. From 2008 to 2010 he starred as Dominic Montgomery on the television series Mistresses. From 2010 to 2011 Rayner starred as Steve Shaw on the TV series Hawthorne. In 2011 he starred as Cairn on the series Dragon Age: Redemption. In 2012 Rayner starred as Aiden marsh on the television series Hunted. Since 2014 he has starred as Barry Al-Fayeed on the series Tyrant. He has starred in the movies RedMeansGo, Love and Other Disasters, Straightheads, Steel Trap, The Task, and Tracers. Rayner has also appeared in episodes of the TV series At Home with the Braithwaites, Making Waves, Vincent, Sensitive Skin, Doctor Who, Waking the Dead, Undercovers, and Miranda. He is in a relationship with actress Lucy Brown and has dual citizenship in the United States and the United Kingdom.