Adam Driver net worth and salary: Adam Driver is an American actor who has a net worth of $16 million. Driver first became well-known for his portrayal of Adam Sackler on the hit HBO, a comedy-drama "Girls" which was loosely based on the life of Lena Dunham, the show's creator and star. Driver was nominated for a Primetime Emmy Award for Outstanding Supporting Actor in a Comedy Series for this role in 2013.

Early Life: Adam Douglas Driver was born on November 19, 1983. Driver was born in San Diego, California and relocated to Mishawaka, Indiana at the age of seven, where he was raised by his mother Nancy, a paralegal, and his stepfather Rodney G. Wright, a minister at a Baptist church. Driver attended Mishawaka High School in 2001 where he was a self-described misfit, even starting a fight club with his friends inspired by the 1999 film "Fight Club." He graduated in 2001 and afterward worked as a door-to-door salesman selling Kirby vacuum cleaners. Following the events of 9/11, Driver joined the United States Marine Corps. After serving nearly three years, his unit was deployed to Iraq. However, shortly before leaving for Iraq, Driver broke his sternum while mountain biking and was medically discharged. Driver studied at the University of Indianapolis for a year before transferring to Juilliard, where he studied drama and graduated with a Bachelor of Fine Arts in 2009.

Acting Career: Driver remained in New York City after graduating from Juilliard and began appearing in Broadway and off-Broadway productions, also working as a busboy and a waiter to pay bills. His first TV appearance was in an episode of "The Unusuals". His first feature film appearance was in Clint Eastwood's "J. Edgar." After a memorable audition that Lena Dunham recalled as "powerfully odd," Driver was cast in her HBO comedy-drama series "Girls" as emotionally unstable Adam Sackler, the boyfriend of Dunham's character Hannah Horvath. This series was a breakthrough for Driver, who was nominated for three Emmys for Outstanding Supporting Actor for his work on the show. He played the role of Adam Sackler from 2012 until the show ended in 2017.

Meanwhile, Driver also worked alongside better-known actors such as Daniel Day-Lewis, Sally Field, David Strathairn, Joseph Gordon-Levitt, James Spader and Tommy Lee Jones in the 2012 film "Lincoln." He then garnered off-Broadway for playing Welsh houseguest Cliff in "Look Back in Anger" and received the Lucille Lortel Award for Outstanding Featured Actor in a Play. In 2013 he appeared in two movies, "What If" and "Bluebird." His next big role in a film was in the Coen Brothers "Inside Llewyn Davis. The following year, Driver was in the drama "Hungry Hearts," "While We're Young," and "This Is Where I Leave You."

Mainstream Success: In 2015, Adam became internationally famous after appearing in "Star Wars: The Force Awakens." He reprised his role of Kylo Ren in the 2017 movie "Star Wars: The Last Jedi.", and in 2019's "The Rise of Skywalker." His performance was widely positively received and his character was often lauded as the best in the entire series. In 2016, Driver appeared in the sci-fi thriller "Midnight Special" and co-starred in Martin Scorsese's drama "Silence." Driver's final film of 2016 was Jim Jarmusch's drama "Paterson," for which the actor received huge amounts of critical acclaim and award nominations. For his work, he won the Los Angeles Film Critics Association Award for Best Actor. The film was included on many critics' top ten lists of best films of 2016. In 2017, Driver played a one-armed Iraq War veteran in "Logan Lucky."  Adam received critical praise for his role in the 2018 movie BlacKkKlansman. He was nominated for an Academy Award for Best Supporting Actor for his work on the film as well as a Golden Globe for Best Supporting Actor. That same year, Driver starred in Terry Gilliam's "The Man Who Killed Don Quixote." In 2019, he starred in "The Report" and returned to Broadway to play Pale opposite Keri Russell in "Burn This," for which he received much acclaim and a Tony nod for his explosive performance. Driver worked with Jim Jarmusch yet again in the zombie comedy "The Dead Don't Die," for which his performance was again lauded by critics. Additionally in 2019, Driver co-starred with Scarlett Johansson in Noah Baumbach's drama "Marriage Story." Driver received overwhelmingly positive acclaim for his role, as well a nomination for an Oscar for Best Actor. On the horizon, Driver is slated to star in "Annette", as well as two Ridley Scott movies. Outside of film and television acting, Driver has hosted "Saturday Night Live" three times, and voiced Kylo Ren in two video games.

Personal Life: In June of 2013, Driver wed his longtime girlfriend, Joanne Tucker. They met when they were in drama school together at Julliard. Driver announced in October 2019 that the couple had had a son two and a half years prior, and they had kept him shielded from media attention. The family lives in Brooklyn Heights.

Driver runs a nonprofit organization called Arts in the Armed Forces. The organization arranges theatre performances for all of the branches of military personnel in the U.S. and abroad.

Adam has expressed in many interviews that he refuses to watch or listen to his own performances. During a radio interview with NPR's "Fresh Air," he walked out of the studio  mid-interview when the host insisted on playing a clip from "Marriage Story." 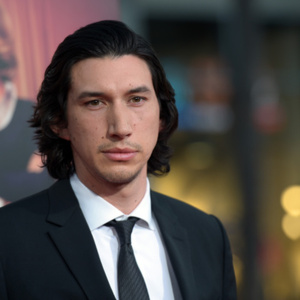