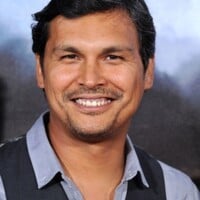 Adam Beach Net Worth: Adam Beach is a Canadian Salteaux actor who has a net worth of $2 million. Adam Beach was born in Ashern, Manitoba, Canada in November 1972. He took a drama class at Gordon Bell High School and starting performing in local theater productions. Adam dropped out of school and took a lead role at the Manitoba Theatre for Young People. His debut screen role came in the 1990 TV movie Lost in the Barrens. His feature film debut came in 1993 in Cadillac Girls. From 1993 to 1995 Beach had a recurring role as Nevada on the TV series North of 60. In 2007 he starred as George Keeshig in the series Moose TV. Beach starred as Detective Chester Lake on Law & Order: Special Victims Unit from 2007 to 2008. In 2010 he starred as Tommy Flute on the TV series Big Love. Since 2012 Beach has starred as Bobby martin on the television series Arctic Air. He has also starred in the movies Coyote Summer, Mystery, Alaska, Joe Dirt, Windtalkers, Posers, Flags of Our Fathers, American Evil, Donkey, Cowboys & Aliens, Ice Soldiers, A Fighting Man, and The Road to Tophet. Beach has won Best Actor awards from the American Indian Film Festival, First American in the Arts Awards, and San Diego World Film Festival. He was nominated for a Golden Globe Award in 2008.