How much is Abigail Breslin Worth?

Abigail Breslin Net Worth: Abigail Breslin is an American actress who has a net worth of $8 million. She began her career as a child actor, winning critical praise for her various performances. Today, she is an established face within the entertainment industry, having successfully transitioned into more adult roles.

Early Life: Abigail Kathleen Breslin was born on April 14th of 1996 in New York City. Her mother was a talent manager, giving Abigail a connection to the entertainment world early on. Her two siblings are also actors. Family was extremely important to Abigail while she was growing up, and in 2013 it was reported that she was still living in the same apartment she grew up in.

Career: Abigail Breslin has been acting her whole life. At age 3, she booked her first commercial for Toys "R" Us. This would lead to a number of commercial roles early in her career, allowing her to hone her acting skills and become established in the industry. Her breakthrough role as a child actor came in 2002 when she appeared in Signs. The M. Night Shyamalan film was a box office success with $408 million in global earnings, and Breslin was singled out by critics for her excellent performance.

Breslin's next film, Raising Helen, was not as successful. She followed up with a small role in The Princess Diaries 2: Royal Engagement and a substantial role in the independent film Keane. Although Breslin had established herself as a talented child actor, it wasn't until 2006's Little Miss Sunshine that she really took Hollywood by the horns. She took a central, leading role in the film despite her age, and she contributed considerably to its success. Little Miss Sunshine received stellar reviews and earned over $100 million at the box office. Many of the production staff and actors on the set of the film were amazed at how seriously Abigail Breslin took the role, and she displayed a professional maturity beyond her years.

In 2007, Breslin branched out into stage work, making her Broadway debut with Right You Are alongside acting greats such as Natalie Portman and Cate Blanchett. That year, she ranked eighth in Forbes' list of "Young Hollywood's Top-Earning Stars" after raking in $1.5 million the previous year. During 2007, Abigail Breslin continued to appear in archetypal "little girl" roles for films like Definitely, Maybe and No Reservations. Although her characters were fairly one-dimensional, Breslin still managed to show off her acting abilities.

A role in Nim's Island came next in 2008, and the film performed well at the box office despite receiving mixed reviews. She also took the lead role in another commercially successful film, Kit Kittredge: An American Girl. In 2009, Breslin appeared in My Sister's Keeper, another film that enjoyed box office success with lukewarm critical reception. A major step forward came in 2009 when she played the role of "Little Rock" in Zombieland. In 2010, she made another Broadway appearance with The Miracle Worker.

In 2013, Breslin began to make the transition from child acting to more mature roles. That year, she appeared in the thriller The Call and the horror film Haunter. She followed that up with a role in Ender's Game. Once again, these films were critical and box office failures, and yet Breslin was often singled out as their "one saving grace." The exception was August: Osage County, which received positive reviews. In 2014, she was cast in the film Perfect Sisters, and in 2015 she joined Scream Queens, a TV series that ran until 2016. 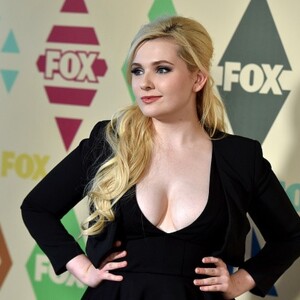