Aaron Taylor-Johnson Net Worth: Aaron Taylor-Johnson is an English actor who has a net worth of $16 million. He was born in June of 1990 and has been involved in various acting ventures since the age of 6. Hailing from High Wycombe, Buckinghamshire, his mother is a housewife while his father woks as a civil engineer.

Johnson attended the Jackie Palmer Stage School where he became involved in a number of extracurricular activities, including drama, singing, acrobatics, and various forms of dance. He is best known for his roles in Angus, Thons and Perfect Snogging, The Illusionist, Nowhere Boy, Kick-Ass and its sequel, Kick-Ass 2. He also played the title character in the latter, before staring in the remake of the cult classic monster flick, Godzilla. Throughout his career, Johnson was credited as Aaron Johnson, which he also used personally. However, in 2012 he married Sam Taylor-Wood, a director, and subsequently legally and professionally changed his name to the hyphenated Taylor-Johnson. They met in 2009 when Sam Taylor-Wood directed Nowhere Boy, in which Johnson starred. Together, the couple has four daughters, two of whom were Sam's from her previous marriage. Taylor-Wood is 23 years his senior. In January 2017, Aaron Taylor-Johnson won a Golden Globe for his role in the movie "Nocturnal Animals". 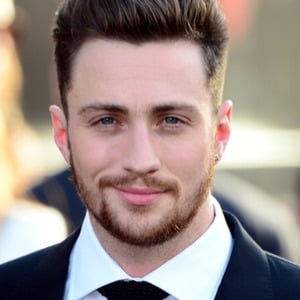