Aarón Díaz Net Worth: Aarón Díaz is a Mexican actor, singer and model who has a net worth of $6 million. Aarón Díaz (Spencer) was born March 7, 1982 in Puerto Vallarta, Jalisco, Mexico. Díaz speaks fluent English and Spanish and lived for a time in Palo Alto, California. After high school in California, he returned to Mexico and studied at the exclusive Televisa Acting School Centro de Educación Artística (CEA). He made his acting debut in the popular teen drama Clase 406 and landed a role in yet another teen drama, Corazones al límite. He then played the role of the older Andrés Romero in the telenovela Barrera de amor. He also starred along former flame Sherlyn in Mexico's own version of Grease entitled Vaselina. In 2006, he played Alexander Von Ferdinand, the main male protagonist for the teen telenovela called Lola…Érase una vez. In 2008, he debuted as a designer and entrepreneur with the clothing brand 'Perra'. Díaz also had musical aspirations and released his first album Enamórate de mí in 2009. His second album, self-titled Aaron Diaz, was released in 2011. His next role was the main protagonist in the latest version of the telenovela Teresa. Ever the entrepreneur, in 2010 he released a 2011 calendar with exclusive, artistic and original photos of himself. The success of the first calendar caused him to release a 2012 version in December 2011. In November 2011, Díaz made his debut in the short-lived American television show Pan Am. Diaz dated and eventually married actress Kate del Castillo on August 29, 2009 in Las Vegas, Nevada. Their separation was announced in July 2011. Diaz is currently in a relationship with his co-star from El Talismán, Lola Ponce. In 2012, the couple announced they were expecting their first child together. The couple's daughter Erin was born February 2013. In 2014, they confirmed they were expecting a second child together. 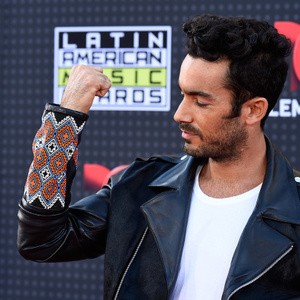