What was Walt Disney's Net Worth?

Walt Disney was an American film producer, director, screenwriter, voice actor, animator, entrepreneur, entertainer, international icon, and philanthropist. Walt Disney had a net worth equal to roughly $1 billion at the time of his death in 1966 (after adjusting for inflation). At the time of his death, Disney's various assets were worth $100 – $150 million in 1966 dollars, which is the same as $750 million – $1.1 billion today. His stake in the Disney production company alone was worth $600 million (after adjusting for inflation). He also owned the largest individual stake in Walt Disney Inc., which was created in 1953 to control Disney's intellectual property, design, and other assets. Upon his death, he left 45% of his estate to his wife and children in the form of a family trust, and 10% to his sister, nieces, and nephews. We describe what happened to Walt's wealth in much greater detail at the end of this article. Outside of family, the remaining 45% of Walt's estate established a charity. The majority of that charity's funds were given to CalArts, a private art school.

Walter Elias Disney was born in Chicago's Hermosa neighborhood on December 5, 1901, the fourth son of Elias and Flora Disney. He had four siblings, brother Herbert, Raymond and Roy, and a sister, Ruth. The family moved to Marceline, Missouri when Disney was four years old, and it was there that he developed an interest in drawing. One of his earliest drawing projects was when he was paid to draw the horse of a retired neighborhood doctor.

The Disneys moved in 1911 to Kansas City, Missouri. While attending the Benton Grammar School, Disney met fellow pupil Walter Pfeiffer, who introduced him to the world of vaudeville and motion pictures. During this time, Disney also attended Saturday classes at the Kansas City Art Institute. The Disney family moved yet again in 1917, this time back to Chicago. Disney attended McKinley High School where he landed the role of cartoonist for the school newspaper and took night courses at the Chicago Academy of Fine Arts.

During his early career, Disney and fellow artist and friend Ub Iwerks took jobs at the Kansas City Film Ad Company. It was there that Disney first became interested in animation. 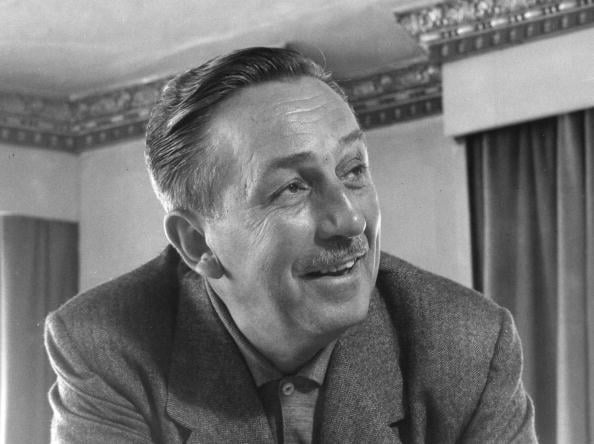 Disney moved to Hollywood in July 1923. His previous business venture, Laugh-O-Gram Studio, had gone bankrupt, but he had produced a short film combining live-action and animation based on the story "Alice's Adventures in Wonderland." He was successfully able to sign a contract with New York film distributor Margaret J. Winkler in October 1923 for six "Alice" comedies. In order to produce the films, Disney formed the Disney Brothers Studio (later renamed The Walt Disney Company) to produce the "Alice" films.

Disney, dissatisfied with the format of the short cartoons he was producing, began production on his studio's first full-length feature animation, Snow White and the Seven Dwarfs. The production of the film took four years, and cost $1.5 million to produce, but premiered in December 1937 to high praise from critics and audiences alike. By May 1939, it had grossed $6.5 million. What followed is what is commonly referred to as "The Golden Age of Animation," with the studio going on to release animated films like Dumbo (1941), Bambi (1943), Pinocchio (1940) and Fantasia (1940). These films did not perform as well as expected, and by 1944 Disney's company owed the Bank of America debts of $4 million. Disney returned to animated features with 1950's Cinderella, which was a commercial and critical success, and other films like Alice in Wonderland (1951) and Peter Pan (1953).

From the mid-1950s onwards, Disney began focusing more of his time and efforts on other ventures outside of animation. Inspired by the layout of Tivoli Gardens in Copenhagen, Denmark, Disney began focusing on the development of a theme park in California. He formed WED Enterprises (now Walt Disney Imagineering) and used his personal money to fund a team of engineers and animators to work on the plans for the park, set to be built on a plot of land in Anaheim, California, that had been purchased. Disneyland was officially opened in July 1955 to great success. After only a month in operation, the park was receiving over 20,000 visitors a day and had welcomed 3.6 million guests by the end of its first year.

He was inducted to the Hollywood Walk of Fame in February 1960 with two stars: one for his work on motion pictures, and the other for his television work. He was also posthumously inducted into the Television Hall of Fame in 1986, and the California Hall of Fame in December 2006. Until his death, Disney continued to work on various animation, film, resort and park projects. In total, he had been involved in 81 feature films. 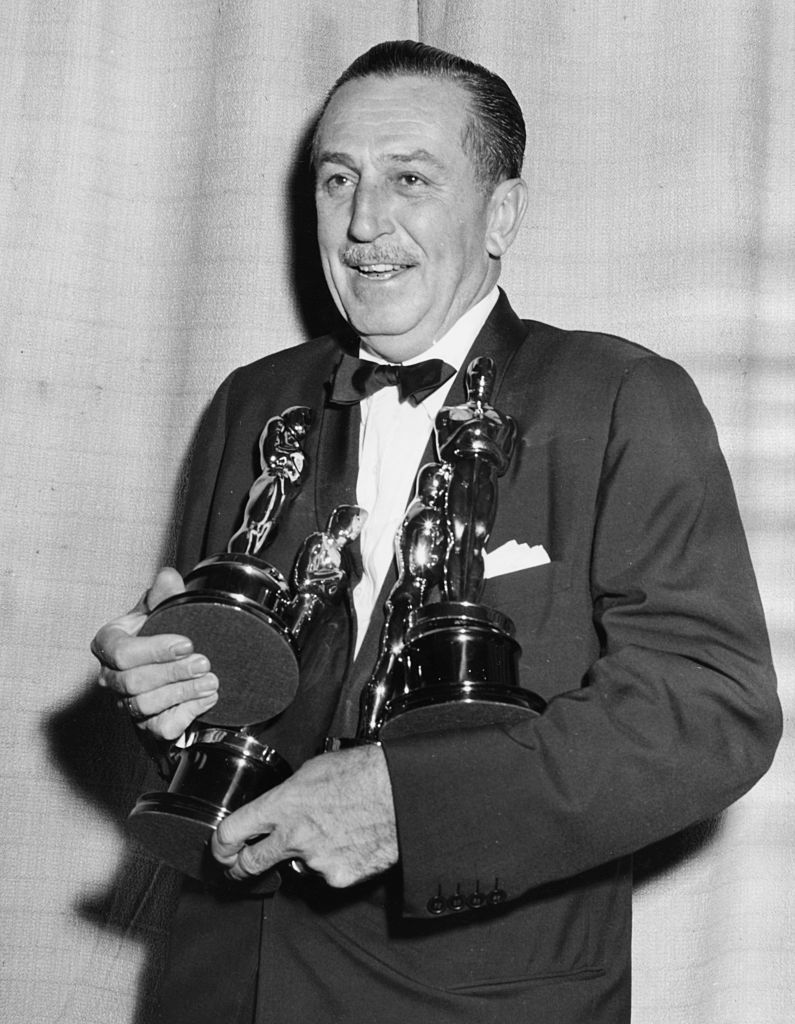 Walt Disney holds the record for most Academy Award wins by an individual. He won a stunning 22 Academy Awards. In 1954 alone he won FOUR awards out of six nominations. He won 10 awards in 8 consecutive years (this is also a record) between 1931 and 1939.

Disney married ink artist Lillian Bound in July 1925. They had two daughters, Diane Disney and Sharon Mae Disney. Sharon was adopted by Walt and Lillian just a few weeks after being born. Walt and Lillian were married until his death in 1966. Walt Disney passed away on December 15, 1966, just ten days after his 65th birthday, from lung cancer.

As we stated previously:

Upon his death, Walt Disney left 45% of his estate to his wife and children in the form of a family trust, and 10% to his sister, nieces, and nephews. The remaining 45% established a charity. The majority of that charity's funds were given to CalArts, a private art school.

At the time of his death in 2009, Walt's nephew Roy Disney owned 16 million company shares, roughly 1% of the total equity. Those holdings gave Roy Disney a net worth of $1.2 billion at the time of his death. One of Roy's four children, daughter Abigail Disney, has earned headlines in recent years as a vocal critic of obscene levels of wealth, ironically she is especially critically of inherited wealth. Abigail has revealed that she could have been worth around $500 million had she never donated any money to charity. Today she is worth around $120 million.

At the time of his death, Walt was survived by widow Lillian and his two daughters Diane and Sharon. Sharon died in 1993 of breast cancer. Lillian died in 1997 at the age of 98. Diane Disney Miller died in 2013.

Before her death, Lillian donated hundreds of millions of dollars to charity outside of her husband's previous donations. For example, in 1987 she donated $50 million to the city of Los Angeles to construct a concert hall. She ultimately gave a total of $274 million to create what became the Walt Disney Concert Hall (construction wasn't completed until 2003).

Upon Lillian's death, Diane was her only surviving child since Sharon had died four years prior. Through their two children Diane and Sharon, Walt and Lillian Disney would eventually have 10 grandchildren.

Diane's seven children would go on to live comparatively normal lives outside of the headlines and courtrooms. Sharon's children were another story.

Walt Disney's trust dictated that any grandchildren would receive 20% distributions of their trust value, primarily in Disney stock, when each child turned 35, 40 and 45. The amounts equated to roughly $30 million every five years. Sharon's three children were the beneficiaries of a roughly $400 million trust upon her death in 1993. A grandchild could be denied access to inheritance by the trustees if they failed to demonstrate "maturity and financial ability to manage and utilize such funds in a prudent and responsible manner."

Sharon's adopted daughter Victoria suffered from drug addiction most of her life. She once destroyed a cabin on a Disney cruise so badly that company CEO Michael Eisner had to intervene to get her trustees to cover the damage. Despite having a lifetime of serious addiction and personal issues, on her 35th birthday Victoria's trustees allowed for $20-30 million distributions to commence. She died one year later in 2002 at the age of 36. At that point her share of the $400 million went to her twin half-siblings Brad and Michelle.

Michelle, who also allegedly suffered from addiction issues, went into a coma in 2009 after a brain aneurysm. She eventually recovered from the coma and is still alive today, living a fairly normal life in Newport Beach, Ca. Michelle has reportedly never had a job.

Brad on the other hand spent nearly two decades fighting with his trustees, including twin sister Michelle. Brad has at times been considered an "incapacitated adult as a result of chronic cognitive deficits and mental disorders." In 2019, as part of that ongoing bitter lawsuit, a judge referred to Brad has "someone who may suffer, on some level, from Down syndrome."

When Brad and Michelle turned 40 in June 2010, they both had trust funds worth $200 million. On their 40th birthday their trustees decided to give Michelle distributions, but withheld Brad's. Brad was understandably upset, especially considering that the same trustees approved of his half-sister Victoria receiving $20 million on her 35th birthday a decade earlier… arguably leading to her death. Up to this point Brad had struggled as an adult. He worked at a restaurant busing tables for a time, before buying a UPS store. Lawsuits flew for the next decade. It wasn't until July 2021 when he lost his final appeal to directly control his $200 million trust fund. His main opponent in the fight was his twin sister Michelle.

For more than 30 years, a woman named Thelma Pearl Howard served as Walt's personal housekeeper. She cooked all of the family's meals and helped raise Diane and Sharon.

Thelma went to work for the Disneys in 1951 at the age of 36. She worked at the family's 3.6-acre estate in Holmby Hills, California. The property's pool house was bigger than the home Thelma grew up in. Diane and Sharon would later describe Thelma as a beloved member of the family, a real life Mary Poppins.

For her work, Thelma earned a modest salary but also had free room and board at the the mansion. As a perk, every Christmas, Walt gifted Thelma shares of Disney stock. Because Thelma respected Walt so much, she never sold a single share in her entire lifetime and even used some of her own money to buy more on the side.

Thanks to those annual gifts and a number of stock splits, by the time Thelma died in 1994 she had amassed an astonishing 193,000 shares. At the time of her death those shares were worth $9.5 million! Thelma used some of her wealth to establish lifetime care for her adult son who had developmental issues. The remainder established the Thelma Pearl Howard Foundation, which eventually donated millions of dollars to charity.

FYI: After additional stock splits, if she were alive today Thelma would control around 600,000 shares of Disney. Those 600,000 shares would have been worth around $115 million in mid-2021 when Disney stock hit $190 per share.