Ron Conway net worth: Ron Conway is an American angel investor who has a net worth of $1.5 billion dollars. Conway has earned a fortune thanks to early investments in companies like Airbnb, Facebook, Google and Reddit.

Ronald Crawford Conway was born on March 9, 1951. He graduated from San Jose State University then went to work in the semiconductor industry. From 1973 to 1979 he worked in marketing positions with National Semiconductor Corporation. From 1979 to 1999 he served as the President and CEO for Altos Computer Systems, which he co-founded. From 1991 to 1995 Conway ran Personal Training Systems, which he acquired from SmartForce/SkillSoft.

Conway is the founder and Managing Partner of the Angel Investors LP funds. Some of his early huge successes include Google, PayPal, and Ask Jeeves. In 2005 Conway started to invest independently. His fund Angel Investors I generated a seven times return. He threw extravagant cocktail parties and raised money from celebrities such as Arnold Schwarzenegger, Tiger Woods, Henry Kissinger, and Shaquille O'Neal. Conway has also invested partially in the companies BuzzFeed, Digg, Facebook, Foursquare, Napster, Pinterest, and Twitter. He is on the Benefit Committee of the Tiger Woods Foundation. In 2010 he worked with Mayor Ed Lee and the City of San Francisco to establish a new tech organization initiative to promote tech jobs called sf.citi.

In December 2020 Ron Conway announced that he had signed "The Giving Pledge", which means he will donate at least half of his fortune to charity before he dies or at the time of his death. 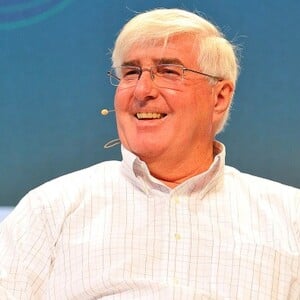