Paul Volcker net worth: Paul Volcker was an American economist who had a net worth of $15 million. Volcker died on December 8, 2019 at the age of 92.

Paul Volcker was born in Cape May, New Jersey in September 1927. He graduated from Princeton University, Harvard University, and the London School of Economics. Volcker is a member of the Democratic party. He served as the Under Secretary of the Treasury for International Affairs under President Richard Nixon from 1969 to 1974. Paul Volcker served as the President of the Federal Reserve Bank of New York from 1975 to 1979. He was the 12th Chairman of the Federal Reserve from 1979 to 1987 under Presidents Jimmy Carter and Ronald Reagan. Paul Volcker served as the Chair of the President's Economic Recovery Advisory Board from 2009 to 2011 under President Barack Obama.  He has been credited with ending the high levels of inflation in the United States in the 1970s and the early 1980s.

According to his 1982 wealth disclosure, Paul Volcker was worth a surprisingly-low $52,000 at the time (without adjusting for inflation).

Paul's biggest government salary was $89,000. When he entered the private sector as President of investment firm Wolfensohn & Co, his base salary was $1 million per year, the same as $3 million per year after adjusting for inflation. When the company was acquired in 1995, Paul made more in one day than he had in 30 years as a public servant. 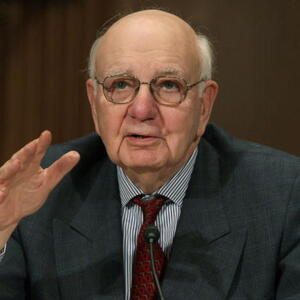