Larry Kudlow Net Worth: Larry Kudlow is an American conservative economist, television personality and newspaper columnist who has a net worth of $10 million. According to his September 2019 financial disclosure, Larry's stock holdings and other liquid assets were worth a minimum of $2 million. This disclosure does not include liquid assets such as personal real estate. It also showed that he earned around $800,000 per year from CNBC and an additional $100-200,000 per year from paid speeches and consulting work.

For many years he was best known for being the host of CNBC's The Kudlow Report and The Larry Kudlow Show on CNBC and WABC Radio, respectively. Larry stepped away from the private sector in April 2018 to become Donald Trump's Director of the National Economic Council.

Early Life: Lawrence Alan "Larry" Kudlow was born on August 20, 1947, in New Jersey. Kudlow studied at the private schools Elizabeth Morrow School and Dwight-Englewood School. In 1969, he earned a degree in history from the University of Rochester. He then embarked on his career as a staff economist at the Federal Reserve Bank of New York. In 1970, he was already working on the Joseph Duffey's US Senate Campaign along with Bill Clinton, John Podesta and Michael Medved. A year later, he got into the Woodrow Wilson School of Public and International Affairs at Princeton University, where he studied politics and economics.

In 1987 Larry Kudlow became Bear Stearns' chief economist and senior managing director. He was let go in 1994 due to cocaine abuse. He apparently skipped an extremely important client presentation because of his addiction.

Larry was the economic counsel to A.B. Laffer & Associates, a member of the board of directors of Empower America and the consulting chief economist for American Skandia Life Assurance, Inc., a subsidiary of Prudential Financial. As a nationally syndicated columnist and editor, he has contributed to numerous US magazines like the National Review.

Salary: His salary while working at CNBC was $800 thousand per year. His salary as Director of the National Economic Council is $185,000.

As an author, he has penned American Abundance: The New Economic & Moral Prosperity and Tide: Why Tax Cuts Are the Key to Prosperity and Freedom. On March 14, 2018 Larry Kudlow was chosen by President Donald Trump to become his senior economic adviser. 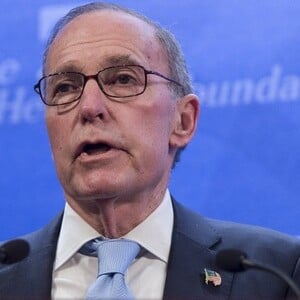