Larry Fink net worth: Larry Fink is an American financial executive who has a net worth of $1 billion. Larry Fink was born in Los Angeles, California in November 1952. He is the chairman and CEO of the multinational investment management corporation BlackRock which has more than $6 trillion of assets under their management making them the largest firm in the world. Fink earned his BA and MBA from the University of California, Los Angeles. His career began at First Boston investment bank in 1976. He helped create and develop the mortgage backed security marked in the U.S. and added up to $1 billion to the company's bottom line. Larry Fink co-founded BlackRock in 1988 under The Blackstone Group before it split in 1994. He has also been Chairman of the Board, Chair of Corporate Council, Chairman of the Executive and Leadership Committees, and Co-Chair of the Global Client Committees. The company went public in 1999. 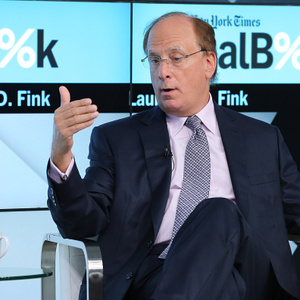