Jim Rogers Net Worth: Jim Rogers is an American entrepreneur and author who has a net worth of $300 million dollars. Born in Baltimore, Maryland, in 1942, Jim Rogers grew up in Alabama and started his first business selling peanuts when he was five years old. He earned a History degree from Yale University in 1964 and went on to work on Wall Street before graduating from Oxford University with a second bachelor's degree in philosophy, politics and economics.

In the early '70s, he joined an investment firm and met George Soros, who would become his founding partner at the Quantum Fund. Within ten years, Rogers retired early and traveled the world by motorcycle before becoming a guest professor at Columbia University. He has made several TV appearances on "The Dreyfus Roundtable" and "The Profit Motive with Jim Rogers". He's the author of "Investment Biker", which chronicles his multiple trips around the globe by motorcycle. The trip earned him a spot in the "Guinness Book of World Records". Later, Rogers founded the Rogers International Commodity Index and became a public supporter of agriculture investments. He regularly appears as a guest on several financial shows and has written several more books, including "Adventure Capitalist" and "Hot Commodities: How Anyone Can Invest Profitably in the World's Best Market". He moved to Singapore in 2007 and has two daughters with wife Paige Parker, whom he met in 1996. 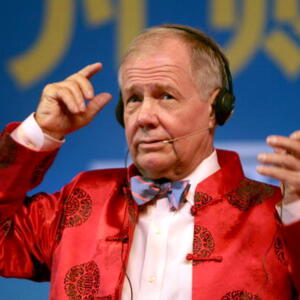