What is Henry Paulson's Net Worth?

Henry Paulson is a retired American investment banker and political figure who has a net worth of $700 million. Henry Paulson served as the United States secretary of the treasury under George W. Bush from 2006 to 2009. Before this, he served as the chairman and CEO of Goldman Sachs. Following his tenure at the treasury, Paulson founded the Paulson Institute to promote sustainable economic growth and environmental consciousness between China and the United States.

Henry Paulson was born on March 28, 1946 in Palm Beach, Florida to Henry Sr. and Marianne. He is of German, Norwegian, and English-Canadian ancestry, and was raised as a Christian Scientist on a farm in Barrington, Illinois. Paulson participated in the Boy Scouts of America growing up, and achieved the rank of Eagle Scout. As a teen, he went to Barrington High School, where he wrestled and played football. For his higher education, Paulson attended Dartmouth College, graduating in 1968 with a bachelor of arts degree in English. He went on to earn his MBA from Harvard Business School in 1970.


Following his graduation from Harvard, Paulson spent two years as a staff assistant to the assistant secretary of defense at the Pentagon. He then spent a year working for the Nixon administration as an assistant to John Ehrlichman.

In 1974, Paulson began working in the Chicago office of Goldman Sachs under James P. Gorter. He later became a partner of the firm in 1982. Subsequently, from 1983 to 1988, Paulson led the Midwest Region's Investment Banking group. He then became managing partner of the Chicago office, and served as co-head of Investment Banking from 1990 to 1994. After this time, Paulson took over as COO, and then succeeded Jon Corzine as CEO, a position he held until 2006. 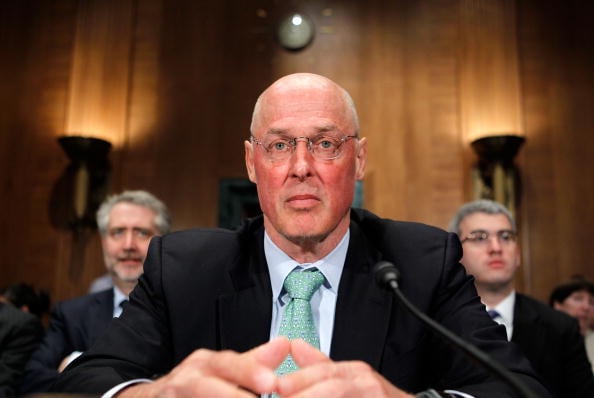 United States Secretary of the Treasury

In May of 2006, Paulson was nominated by George W. Bush to succeed John Snow as the United States secretary of the treasury. Before being sworn in, he was required to liquidate his stock holdings in Goldman Sachs, which had an estimated value of $600 million. During his ensuing tenure, Paulson was integral in facilitating both the subprime mortgage crisis and the convoluted, often botched efforts to help manage it. Notably, he repeatedly offered false assessments of the health of the economy, mendaciously telling the public that the housing market was healthy and that financial markets were beginning to make a comeback. In response to the debacle, he helped create the Hope Now Alliance, which was designed to aid financially struggling homeowners. Additionally, he led the China-US Strategic Economic Dialogue initiative, a framework by which the two nations addressed global areas of economic interest.

During the credit crisis in the late 00s, Paulson called for the overhauling of the United States' financial regulatory system. He received significant backlash for his subsequent actions as he tried and failed to get mounting bankruptcies and other market disasters under control. Paulson led unprecedented government efforts to contain the impact of the multiple crises, including the creation of legislation authorizing the treasury to use $700 billion to stabilize the economy. Moreover, he influenced the decision to create a credit facility of $85 billion to American International Group, in order to prevent it from declaring bankruptcy. In 2008, Paulson urged the government to use hundreds of billions of treasury dollars to aid financial firms in cleaning up nonperforming mortgages, something that would ultimately destroy the liquidity of those firms.

Before becoming Treasury Secretary, Paulson was required to sell his entire stake in his former company Goldman Sachs. This was to ensure he had no conflicts of interests while in office. At that point he owned 1% of Goldman.

Thanks to a tax savings loophole created by George H.W. Bush, before becoming Treasury Secretary, Paulson was allowed to sell his shares without paying any capital gains taxes. This loophole was created to incentive people exactly like Paulson to trade $40 million annual salaries for $183,000 government jobs.

In retrospect, had Paulson never become Treasury Secretary and never sold any Goldman shares, today a 1% stake in the banking giant would be worth around $1.3 billion.

Following his departure from the treasury in 2009, Paulson became a distinguished visiting fellow at Johns Hopkins University's Paul H. Nitze School of Advanced International Studies. Additionally, he was a fellow at the school's Bernard Schwartz Forum on Constructive Capitalism. In early 2010, Paulson published his bestselling memoir "On the Brink: Inside the Race to Stop the Collapse of the Global Financial System." Five years later, he released another bestselling book, "Dealing with China: An Insider Unmasks the New Economic Superpower."

In 2011, Paulson founded the Paulson Institute, a non-partisan think tank devoted to facilitating sustainable economic growth between China and the United States. The same year, he began a five-year appointment as a senior fellow at the University of Chicago's Harris School of Public Policy. Paulson is also a leader of the non-profit advocacy organization Climate Leadership Council. Among his other roles, he co-chairs the Aspen Economic Strategy Group.

With his wife Wendy Judge, Paulson has two children: sports-team owner Merritt and journalist Amanda. Paulson and Judge have homes in both Chicago and the suburb of Barrington Hills.

Unlike most Republicans, Paulson believes in the reality of climate change, and has done significant work to raise environmental awareness. He co-chaired the climate change activist group Risky Business, and is a longtime champion of the conservation organization Rare. Further, Paulson has donated around $100 million in assets to conservancy causes, and has pledged his entire fortune to go to the same purpose upon his passing. 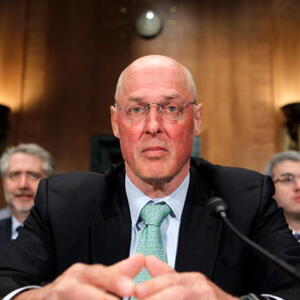