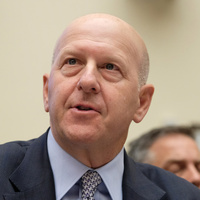 David Solomon net worth and salary: David Solomon is an American investment banker, record producer, and DJ who has a net worth of $100 million. David Solomon was born in Hartsdale, New York in 1962. He is the chief executive officer of Goldman Sachs. He became the CEO in 2018 and the chairman of the company in 2019. Solomon previously served as president and chief operating officer as well as joint head of the investment banking division. David Solomon is a recreational electronic dance music producer using the stage name DJ D-Sol. His debut single "Don't Stop" was released in 2018. Solomon is on the board of directors of the Robin Hood Foundation. In 2016 he listed his apartment in New York City for $24 million and he purchased an estate in Aspen, Colorado for $4 million in 2004 before listing it for $36 million in 2016. In 2018 his personal assistant stole about 500 bottles of his rare wine collection valued at $1.2 million.

Salary: In 2018, David earned $23 million in total compensation. His base salary is $2 million.

Stock Ownership: As of this writing, David Solomon owns 230,000 shares of Goldman Sachs. At a price per share of roughly $210 (where the stock has traded in recent years), his stake is worth around $50 million before taxes.