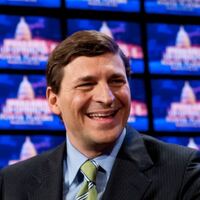 David H. Faber was born in Medford, Massachusetts in March 1964. He graduated from Tufts University with a degree in English. He worked for the magazine Institutional Investor for seven years before joining CNBC in 1993. He has hosted several documentaries on corporations including 2005's The Age of Walmart. This piece earned him a Peabody Award as well as an Alfred I. duPont-Columbia University Award for Broadcast Journalism. He is a co-host for CNBC's Squawk on the Street. He also hosts the monthly show Business Nation which started in 2007. He has written The Faber Report, And Then the Roof Caved In, and House of Cards: The Origins of the Collapse. He hosts the segment "Faber Report" for CNBC as well. Faber has also won an Emmy and a Loeb award.