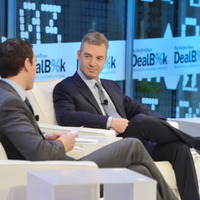 Daniel Loeb net worth: Daniel Loeb is an American businessman and hedge fund manager who has a net worth of $2.3 billion dollars. Daniel Seth Loeb was born in Santa Monica, California in December 1961. He is the chief executive and founder of New York hedge fund Third Point LLC. The company has a portfolio of $14 billion. His key to success is to buy troubled companies, get rid of poor management, and bring them back to profitability. His father was a partner in a law firm. Daniel started a skateboard company in high school. His great-aunt was the co-founder of Mattel Inc. and created the Barbie doll. He graduated with a degree in economics from Columbia University. He worked at Warbug Pincus from 1984 to 1987 and then worked at Island Records. He also worked for Lafer Equity Investors, Jefferies LLC, and Citigroup. He started Third Point Management in 1995 borrowing just over $3 million from family and friends. He has been associated with Yahoo!, Sony, and Sotheby's. He started The Daniel S Loeb Family Third Point Foundation, which earned over $6 million in 2011. He has been recognized for being an advocate for marriage equality legislation in New York State. HE married Margaret Davidson Munzer in 2004.