How much is Bill Ackman Worth?

Bill Ackman Net Worth: Bill Ackman is an American hedge fund manager who has a net worth of $1.4 billion. Bill Ackman has accumulated his net worth through the many business investments he has made in business such as the Target Corporation, Borders Group and more. Born William A. Ackman on May 11, 1966, in Chappaqua, New York, he is the founder and CEO of hedge fund Pershing Square Capital Management LP. Having graduated from Harvard, he also holds an MBA from Harvard Business School. In 1993, he started his professional career in real estate working for his father. However, his tenure under his father's thumb was short as he went on to found Gotham Partners Management Co, a short-lived investment company that culminated with dissolution in 2003 due to some legal troubles. In 2004, he decided to get back to the financial stage as a creator of the Pershing Square Capital, which has shares in companies such as Wendy's International, McDonald's Corporation and in Target Corp. Bill made a name for himself buying a massive share in the lowest price for resale in two years maximum. This short-term strategy was often criticized by the US media, while his attacks against FSA, American division of Dexia, and also against MBIA and Ambac, earned him strong enmity in the world of finance. Being married and a father of three, he is a great supporter to numerous philanthropic and humanitarian causes. 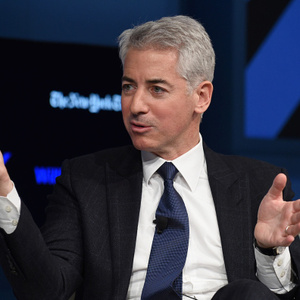