How much is Timothy Geithner Worth?

Timothy Geithner net worth: Timothy Geithner is an American economist, central banker and civil servant who has a net worth of $6 million. Timothy Geithner is probably most famous for serving in President Barack Obama's administration as United States Secretary of the Treasury. He is the former president of the Federal Reserve Bank of New York. He was born on august 18, 1961 in Geithner was born in New York City, but spent most of his childhood in other countries. His father, Peter F. Geithner, was the director of the Asia program at the Ford Foundation in New York. Some of the places Timothy grew up in include the present-day Zimbabwe, Zambia, and India. He completed his high school career at the International School Bangkok, in Thailand. Timothy's parents currently live in Orleans, Massachusetts where his mother, Deborah Moore Geithner, is a pianist and piano teacher. Geithner's maternal grandfather, Charles F. Moore, worked at the ford motor company from 1952-1964 as Vice President of Public Relations, and he also was an adviser to President Dwight D. Eisenhower. Geithner has been married to Carole Sonnenfeld since 1985. They have two children, a daughter and a son. Sonnenfeld was working as a research associate for Common Cause when they married, and her father, was a professor of French and comparative literature at Princeton University Albert Sonnenfeld. Portia Sonnenfeld, Carole's mother was the conductor of the Chamber Symphony of Princeton.

In 1988 Geithner worked at the International Affairs division of the U.S. Treasury Department, prior to that he spent three years in Washington working for Kissinger Associates. He also served as an attaché at the Embassy of the United States in Tokyo. Some more of Geithner's political accomplishments include deputy assistant secretary for international monetary and financial Policy from 1995 to 1996, senior deputy assistant secretary for international affairs from 1996 to 1997, and assistant secretary for international affairs from 1997 to 1998. Interestingly, Tim has struggled with personal tax issues. It was revealed at the Senate confirmation hearings that Geithner had not paid $35,000 in self-employment taxes for the years 2001–2004. He apologized for these issues in a statement to the Senate Finance Committee, calling it a careless oversight.

Geithner came on board as Treasury Secretary at the beginning of the global financial crises. He was directly involved in the allocation of $350 billion of funds from the Troubled Asset Relief Program, that was enacted during the Bush administration. He dealt with multiple high visibility issues, such as efforts to restructure the regulation of the nation's financial system, as well as numerous attempts to spur recovery of both the mortgage market and the automobile industry, President Obama's tax changes, negotiations with foreign governments on approaches to worldwide financial issues, and demands for protectionism.

Tim Geithner Salary
How much did Tim Geithner make as Secretary of the Treasury? $190,000 per year 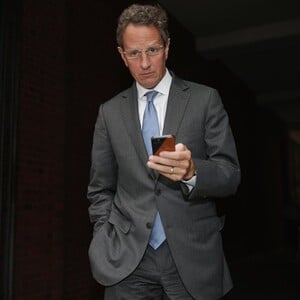