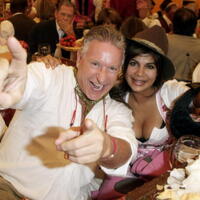 Thomas Kramer net worth: Thomas Kramer is a German entrepreneur and reality star who has a net worth of $90 million dollars. Born in Bad Soden am Tanus, Hesse, Germany, Thomas Kramer showed his razor sharp business instincts while still in his early teens, trading his first stocks at age 14. After briefly attending Harvard College, he left and returned to Germany to work for his father's brokerage firm. He founded his own company in the mid-80s, and after predicting a stock downturn, made a name for himself, and a large profit, as a stock speculator. He poured his money into East German real estate, but met with opposition from area businesses and the press. He then shifted his focus to South Beach in Miami, Florida. His development work in the area met with considerable resistance, but it revitalized the region, which had been failing for some time. In recent years, he has focused on philanthropy and charitable work, and recently appeared on "The Real Housewives of Atlanta" as one of Kim Zolciak's best friends.