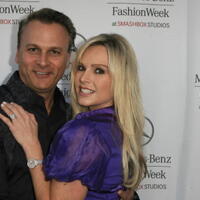 Simon Barney Net Worth: Simon Barney is an American businessman and reality TV personality who has a net worth of $2 million dollars. Simon Barney, born in 1964, is the former husband of reality TV star Tamra Barney. The former couple have both appeared on several seasons of the Bravo hit series "The Real Housewives of Orange County" and were first introduced to viewers as a married couple. Their messy divorce took place during filming, and their custody battle raged on for quite some time. Simon filed for divorce during the show's fifth season, in early 2010, accusing Tamra of being abusive and of engaging in extramarital affairs during their eleven-year marriage. He was opposed to their three children, Sophia, Sydney, and Spencer, being on the show, and it was a big part of their custody dispute. In court filings, Barney demanded no orders to pay spousal support. In 2010, he was arrested for allegedly throwing a dog leash at Tamra as they battled over who got to keep their dog. Tamra reportedly began dating Eddie Judge shortly after the papers were filed and they have since tied the knot. Simon has kept his relationships out of the public eye since divorcing Tamra. He has worked as a car and tequila salesman, and is currently the National Sales Director for Universal Dealers Consultants, a Consulting and Software company for Auto Dealers, Some their clients include Mercedes-Benz USA, BMW USA, Fletcher Jones Group, Bill Jacobs Auto Group, Soave Auto Group. Barney later became engaged to Catushia Ienni.