Seth Gold is an American television reality star who has a net worth of $1 million. Seth Gold has earned his net worth as the star of the American documentary reality television series Hardcore Pawn, which was produced by RDF USA (later Zodiak USA) and Richard Dominick Productions and aired on tru-TV. Hardcore Pawn was a series about the daily activities of an American Jewelry and Loan family-owned pawn shop located in Detroit, Michigan, on Greenfield Road between 8 Mile road and the John C. Lodge Freeway. The show debuted on August 16, 2010, and set a new record with 2 million viewers as truTV's most-watched series debut of all time. The series ended in 2015 after nine seasons and 162 seasons. Seth Gold handles the marketing for this family owned and ran shop, owned by Les Gold, who is the son of the pawnbroker who originally owned Sam's Loans, which was located on Michigan Avenue in Detroit. The assistant manager of American Jewelry and Loan is Seth's sister Ashley, each episode of Hardcore Pawn shows the sibling rivalry between Seth and his sister Ashley. Seth Gold was also an executive producer of Hardcore Pawn from 2011 to 2015. He has also appeared on episodes of the TV series Fox and Friends, Big Morning Buzz Live, The Arsenio Hall Show, Home & Family, The Playboy Morning Show, Today, and LeagueOne: In the Spotlight!. 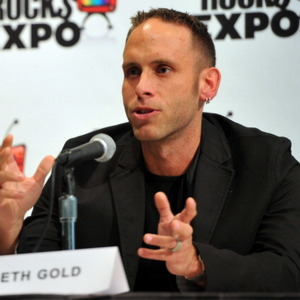