What is Sanjay Gupta's net worth and salary?

Sanjay Gupta is an American neurosurgeon, medical reporter, actor, and writer who has a net worth of $12 million. Sanjay Gupta is considered by many to be one of the most respected journalists on CNN, where he is the Chief Medical Correspondent. He is the associate chief of neurosurgery at Grady Memorial Hospital in Atlanta, Georgia. He is also an assistant professor of neurosurgery at Emory University School of Medicine.

Sanjay has a younger brother named Suneel. Gupta is of Punjabi and Sindhi descent. When he was a boy, he experienced prejudice and bullying. Wanting to fit in, he proposed changing his name to Steve, inspired by Steve Austin of TV's The Six Million Dollar Man. His mother talked him out of it.

Sanjay Gupta graduated from Novi High School in 1986. Sanjay went on to get his Bachelor of Science degree in biomedical sciences at the University of Michigan in 1991. While an undergrad, he was an orientation leader for the freshman orientation program and was also a member of the Men's Glee Club. He received his M.D. from the University of Michigan Medical School in 1993. He was part of an accelerated medical education program called Inteflex (since discontinued) that accepted medical school students directly from high school. Gupta did his residency in neurological surgery at the University of Michigan Health System, completing it in 2000. He then did a fellowship in Memphis, Tennessee at the Semmes Murphy Clinic.

In 1997, Gupta was one of 15 selected to be White House Fellows. During the year-long fellowship, he wrote healthcare speeches for then-First Lady Hillary Clinton.

Gupta is an Emory Healthcare general neurosurgeon at Grady Memorial Hospital and has worked on spine, trauma, and 3D‑image-guided operations. He has published medical journal articles on percutaneous pedicle screw placement (placement of screws by needle puncture rather than cutting through tissue), brain tumors, and spinal cord abnormalities. He is licensed to practice medicine in New York, Michigan, Georgia, and South Carolina. He holds the titles of assistant professor of neurosurgery at Emory University School of Medicine and associate chief of the neurosurgery service at Grady Memorial Hospital in Atlanta, Georgia. 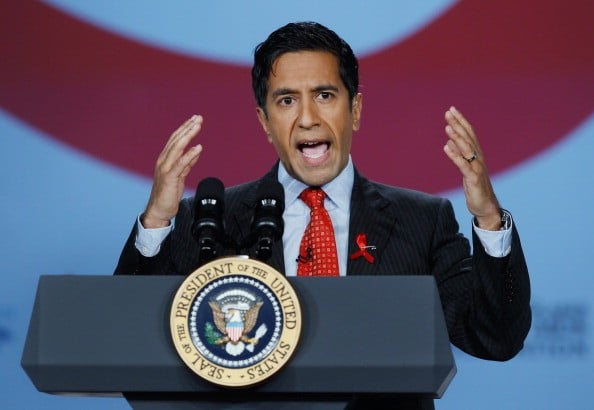 Gupta joined CNN as a medical correspondent in the summer of 2001. Gupta's journalism career really took off in 2003 when he traveled to Iraq in order to cover medical facets of the story of the Iraq invasion for CNN. There, he not only reported on medical stories but actually performed emergency surgery on both U.S. soldiers and Iraqi civilians. Gupta was embedded with a Navy medical unit at the time with a group of doctors called the "Devil Docs," who supported the 1st Marine Expeditionary Force. A Marine suffered a severe head injury, and the Marines asked for Gupta's assistance because of his background in neurosurgery. The man survived and was sent back to the United States for rehabilitation.

In addition to being the chief medical correspondent for CNN, Gupta has also reported stories for The CBS Evening News and 60 Minutes. His work in journalism has earned him at least one important fan – in 2009, he was offered the position of United States Surgeon General by President Barack Obama. He turned down the offer for his "family and career," and he remains an enduring presence on CNN.

In January 2010, Gupta and Anderson Cooper led CNN's coverage of the earthquake in Haiti. Gupta has regularly appeared on The Late Show with David Letterman, The Late Late Show with Craig Ferguson, The Daily Show with Jon Stewart, Real Time with Bill Maher, and The Oprah Winfrey Show.

In a 2013 editorial, Gupta announced that in the process of working on a documentary about marijuana he had changed his mind about the drug's risks and benefits. Gupta had previously criticized laws that allowed patient access to medical marijuana, but he reversed his stance, saying, "I am here to apologize," and, "We have been terribly and systematically misled for nearly 70 years in the United States, and I apologize for my own role in that." The third part of his 3-hour documentary, Weed 3: The Marijuana Revolution, was released in April 2015.

In early 2020, Gupta worked nearly round-the-clock to explain the coronavirus outbreak and demystify concepts such as pandemic and social distancing to the American public.

Gupta is married to Rebecca Olson, a family law attorney. When he proposed, he wrote a page-long poem with the proposal on the last line. He was down on his knee ready to propose before Rebecca finished reading the poem. They were married on May 15, 2004, in a lavish Hindu wedding ceremony at The Shell House on the grounds of the private girls' school Ashley Hall in Charleston, South Carolina.

Gupta and his wife live in Atlanta and have three daughters named Sky, Sage, and Soleil.

Gupta's operating room playlists include hip-hop and the Red Hot Chili Peppers for opening and closing spinal surgeries, when something "a little raucous" is called for, and music that's "more chill," like Coldplay, during operations. 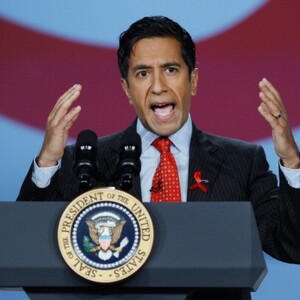