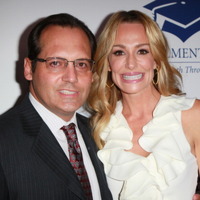 Russell Armstrong net worth: Russell Armstrong was an American investment banker and venture capitalist who had a net worth of -$1 million at the time of his death according to various reports. With his wife Taylor, he became notable after appearing on the first season of The Real Housewives of Beverly Hills.

During his life Russell Armstrong was involved in business ventures involving over 200 companies. He served as the Founding Managing Director of Crescent Financial Partners.

On August 15, 2011, Russell Armstrong was found dead of an apparently suicide at a Los Angeles mansion on Mulholland Drive. Just one month earlier his wife Taylor Armstrong filed for divorce and claimed that she was physically abused by Russell. It was also reported that Armstrong was distraught over the impending divorce and was having crushing financial troubles. Apparently Russell was drowning in a mountain of debt, to the point where his credit cards were being declined at restaurants. Armstrong has been in debt before, having to file for bankruptcy in 2005. At the time he claimed to have no more than $50,000 in assets and as much as $10 million in debt.