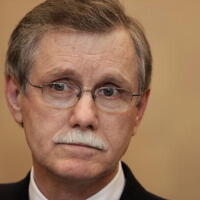 Ron Gettelfinger Net Worth and salary: Ron Gettelfinger is an American businessman and former auto union president who has a net worth of $2 million dollars. Born in 1944, Ron Gettelfinger graduated from Indiana University Southwest in 1976, but began his involvement in unions more than a decade earlier. Gettelfinger worked as a chassis line repairman for Ford Motor Company's Louisville Assembly Plant. He was elected to represent his colleagues and by 1984, became president of the local union. Three years later, he served on the Ford-UAW bargaining committee; soon after, he was elected director of the UAW and eventually vice president. In 2002, Gettelfinger was chosen to be the President of the United Auto Workers union; he was re-elected in 2006 and opted not to seek re-election in 2010. He is heavily involved in politics and doesn't shy away from publicly speaking out about his views. While with UAW, the union lobbied for fair trade and criticized the need for corporations to seek the cheapest labor possible. During his time as president, the union was involved in several contentious negotiations with Ford. He believes in a single-payer health care system for the U.S. and served as an elector for Barack Obama in 2008.