Zoe Sugg (Zoella) net worth: Zoe Sugg is an English fashion and beauty vlogger, YouTube personality, and author who has a net worth of $4 million. Zoe Sugg was born in Lacock, England, United Kingdom in March 1990. She is best known for her YouTube name Zoella. Sugg's debut novel Girl Online was published in November 2014.

It broke the record for the highest first week of sales for a first-time novelist since the record was tracked by Nielsen BookScan in 1998. She worked as an apprentice for an interior design company when she decided to create the blog Zoella in 2009. Sugg has been named as one of the National Citizen Service's ambassadors and was the first Digital Ambassador for the mental health charity Mind. She had an uncredited role in the movie Harry Potter and the Philosopher's Stone in 2001 and has appeared in episodes of the series YouTubers react, Newsround, and Loose Women. Sugg launched the beauty product line Zoella Beauty in 2014. At the 2015 Teen Choice Awards she won the Choice Web Star Award in the Fashion/Beauty category. Zoella reportedly earns $75,000 per month from her YouTube channel. 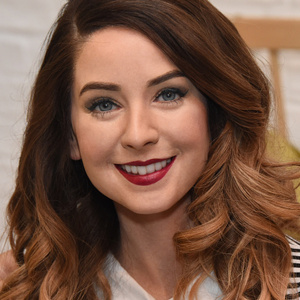