Zac Posen Net Worth: Zac Posen is an American fashion designer who has a net worth of $10 million. He was born Zachary E. Posen on October 24, 1980, in New York City. During his high school sophomore year, he interned with designer Nicole Miller. He enrolled at Parsons The New School for Design at 16. At 18 he entered a womenswear degree program at London's Central Saint Martins College of Art and Design at the University of the Arts London.

In 2000, at the age of 21 while he was still living with his parents and earning an allowance, Zac caught an enormous break when supermodel Naomi Campbell wore one of his dresses. He held his first runway show in 2001 and was soon courted by all the top fashion houses including LVMH, Gucci and Christian Dior.

Zac became a judge on the reality competition Project Runway in 2012. He stayed on the show for seasons 11 through 16.

In 2014 he partnered with David's Bridle on the exclusive line, Truly Zac Posen.

He has designed many wedding gowns for the extremely rich and/or famous, including Katharine McPhee and Princess Eugenie.

In 2017 he was chosen to redesign the uniforms for all employees of Delta Air Lines.

Zac is the founder of "House of Z" clothing line which received an equity investment from billionaire Ron Burkle. By mid-2019 the company had 60 employees. Unfortunately times were tough for House of Z and in November 2019 the firm was abruptly forced to shut down.

Personal Life: Zac and his boyfriend Christopher Niquet have been together since 2008. In January 2017, Zac plunked down $3.5 million to acquire an Upper East Side duplex in New York City. 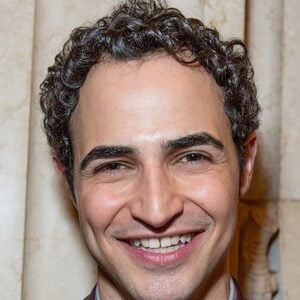