What is Stella McCartney's Net Worth?

Stella McCartney is a British fashion designer who has a net worth of $75 million. Stella McCartney is the daughter of legendary Beatles singer and songwriter Paul McCartney and photographer and animal-rights activist Linda McCartney. She launched her eponymous fashion brand as a joint venture with Gucci in 2001. In 2018 Stella acquired 100% ownership of her brand from Gucci's parent company, Kering. In 2019 she forged a partnership with Kering rival LVMH. Today Stella McCartney operates more than 50 stores worldwide. The brand famously does not use any animal products, a nod to her family's vegan lifestyle. Stella designed Meghan Markle's wedding dress. In 2022 she was appointed a Commander of the Order of the British Empire (CBE) in tribute to her services to sustainability and fashion.

Stella Nina McCartney was born at King's College Hospital in Denmark Hill, Camberwell, in the London Borough of Southwark on September 13, 1971. McCartney spent much of her young childhood traveling the world alongside her parents and siblings (older sister Mary, half-sister Heather, and younger brother James) with Wings, her father and mother's band they formed after the break up of the Beatles about a year before her birth. Paul McCartney has said that the name of the band was inspired by Stella's difficult and scary delivery via emergency C-section–he had prayed in the waiting room that she would be born "on the wings of an angel." The McCartneys wished for their children to have as normal a life as possible, despite being a famous family. They relocated the family to an organic farm in remote Sussex and sent the children to local public schools. 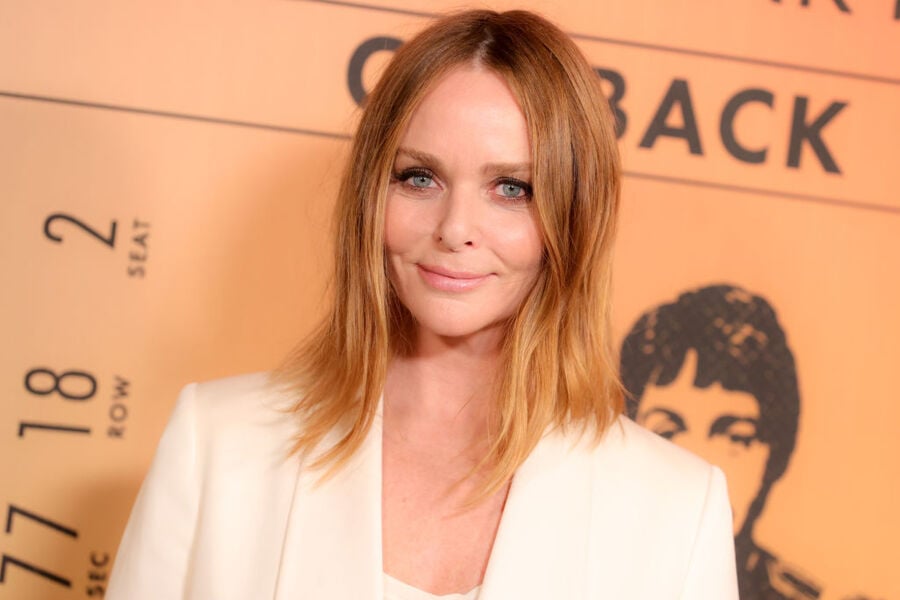 McCartney has built a wildly successful career as a fashion designer. McCartney's interest in fashion design began at a young age. When she was just 13, she designed her first jacket. From there, she aspired to make a living in the world of fashion design, and scored an internship with the famous fashion designer Christian Lacroix at the age of 16. Afterward, she studied the foundations of art at Ravensbourne College of Design and Communication and then went on to obtain a degree in fashion design at Central Saint Martins. She found herself with many connections in the fashion design industry and, senior year, had the opportunity to have one of her collections modeled by friends Naomi Campbell and Kate Moss as part of her graduation project. Tokio, a London boutique, bought the entire collection.

In 1997, McCartney got a high profile job as the Creative Director of the French fashion house Chloe. She eventually left that role to team up with Gucci (now called Kering) in 2001 to develop her own label. Her first collection was shown in Paris. She partnered with Kering for 17 years, and in April 2018 decided to take the reins of her career and purchase the stake of her company. She now operates several freestanding stores in many major cities across the world including New York, London, Paris, Barcelona, Milan, and Rome. 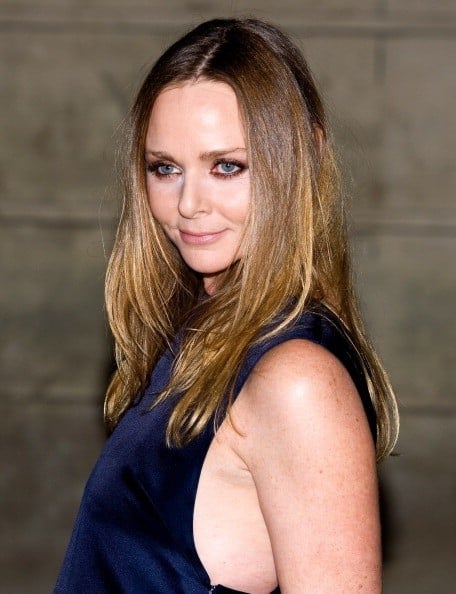 Over her career, Stella has collaborated and partnered with many major brands such as Adidas and Disney, and branched out to include menswear, a children's clothing for Gap Kids, lines for budget-friendly stores such as H&M, an organic skincare line, and perfume. She has often cited her mother's style as inspiration for her designs.

McCartney has designed clothing and costumes for a vast number of musicians, athletes, actors and actresses, and public figures. In 2004 alone, she designed clothes for both Madonna and Annie Lennox's tours. Notably, she designed Meghan Markle's wedding reception dress for her marriage to Prince Harry in May 2018, later creating 46 replicas of the coveted and highly sought-after dress. She teamed up with Taylor Swift in 2018 to release a fashion line called Stella X Taylor Swift, inspired by Swift's album "Lover." In 2019, she launched a line called All Together Now, a Beatles-inspired range.

One distinguishing feature of McCartney's work in fashion design is her consciousness of animal rights. Following in her mother's footsteps as a consistent supporter of PETA, McCartney has a "no animal" policy regarding her designs. She goes to great lengths in order to not use leather or fur in her work. Her shoes and boots are marketed as vegan-friendly.  However, some have pointed out that her fashion designs have contained animal byproducts such as wool and silk.

In October 2018, McCartney launched the Stella McCartney Cares Foundation, a charity dedicated to the prevention and treatment of breast cancer. She tragically lost her mother to the disease in 1998. The charity focuses on helping patients, survivors, and their families cope with the diagnosis and treatment. The charity's first initiative was to provide post-operative mastectomy compression bras to women undergoing breast cancer treatment.

McCartney has won many prestigious awards and honors for her work. She was awarded Designer of the Year at the British Style Awards in November 2007. In 2009, she was named Glamour's Woman of the Year. Time has also named her on the list of the 100 most influential people in the world. Also in 2009, she was given the VH1/Vogue Designer of the Year award, with her father Paul presenting it to her. She dedicated the award to her late mother. She was included on the list of Telegraph's most powerful women in Britain in 2011. McCartney was awarded the Special Recognition Award for Innovation at the 2017 Fashion Awards.

Stella McCartney is married to Alasdhair Willis. They were married on August 30, 2003 at Mount Stuart House on the Isle of Bute in the lowlands of Scotland. She self-designed her wedding dress, inspired by her mother's wedding dress she wore in 1969. They have four children together: Miller Alasdhair James Willis (2005), Bailey Linda Olwyn Willis (2006), Beckett Robert Lee Willis (2009), and Reiley Dilys Stella Willis (2010.) The family splits their time between a home in West London and a house in the English countryside.