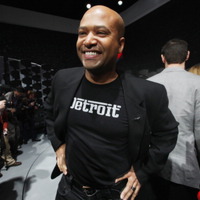 Ralph Gilles Net Worth: Ralph Gilles is an American-Canadian automobile designer who has a net worth of $10 million. Ralph Gilles was born January 14, 1970 in New York City, New York. His parents were Haitian immigrants. Raised in Montreal, Quebec, Gilles has been passionate about cars since the age of 6 and was drawing concept vehicles by the age of 8. When Gilles was 14, an aunt (Giselle Mouscardy) noticed he was talented at sketching cars and wrote to former Chrysler Chairman Lee Iacocca to inform him of her nephew's talents. A reply came from K. Neil Walling, Chrysler's design chief at the time, suggesting Gilles attend one of three design schools. Gilles subsequently attended the College for Creative Studies in Detroit, Michigan. In 2002, Gilles received an Executive MBA from Michigan State University. Gilles is currently the President and CEO of the SRT Brand and Senior Vice President of Design at Chrysler Group LLC. He styled the 2005 Chrysler 300 after joining Chrysler in 1992. Gilles was also the supervisor of the design team who created the 2014 SRT Viper. In August, 2008, Gilles replaced the now retired Trevor Creed as Senior Vice President of Design. In October 2009, Gilles was promoted to President and CEO of the Dodge Car Brand. He was replaced as Dodge's CEO in June 2011, but remained as Senior Vice President of Design and eventually became the CEO of Chrysler's Street and Racing Technology division.