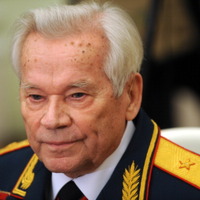 Mikhail Kalashnikov Net Worth: Mikhail Kalashnikov was a Russian general, writer, and inventor who had a net worth of $500 thousand. Born in Kurya, Altai Krai, Russian SFSR in 1919, Mikhail Kalashnikov was drafted into the Red Army during the late '30s. He was made a tank mechanic thanks to his engineering background and soon began inventing new items for the Soviet military. He began crafting a new rifle, working on a submachine gun. During the '40s, Kalashnikov continued to design new weapons, including the Mikhtim, which became the basis for several prototype rifles, culminating in the release of the AK-47, which stands for Avtomat Kalashnikova Model 1947. Within two years, it was the Soviet Army's standard assault rifle. Kalashnikov continued to work in weapons design, though none of his future creations ever became as famous as the AK-47. By 2009, an estimated 100 million assault rifles had been created around the world. Kalashnikov was married twice, first to Ekaterina Danilovna Astakhova, and second to Ekaterina Viktorovna Moiseyeva. His second union lasted from 1921 until 1977 and produced four children during the '40s and '50s. Kalashnikov fell ill during late 2013 and died on December 23rd from a gastric hemorrhage in Izhevsk, Udmurtia, Russia. He was 94 years old.